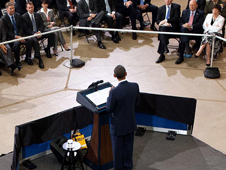 The vision is to harness the excitement and energy of our young people now participating in robotics competitions to win back the robotics market with new inventions and products. Today, new robot niche markets have formed based on US innovations, such as household robots, surgical robots, and scout robots. Where robots were once kept in cages and separated from people, we are now seeing robots built to co-exist with humans, helping people at work and throughout society. The NRI is targeting these new machines that will work with humans as co-workers, co-explorers, co-inhabitants, co-drivers, creating and capturing the new discipline of co-robotics.

The NRI engages young people, funds university research, partners with corporate R&D, and pushes the technology with agency-specific challenges. This initiative forms a pipeline of innovation to find, sponsor and cultivate new ideas and their inventors to insure US leadership in the future of co-robotics. 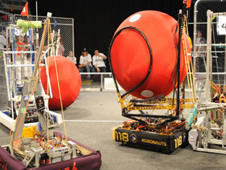 Students and their robots participating in competition sponsored by NASA.
›  Link to larger photo K-12 Science, Technology, Engineering and Mathematics

For decaces NASA has been a strong supporter of educational robotics outreach, and is backing robotics competitions that engage tens of thousands of children each year. We believe that one of these young people will invent and build the next big thing, creating new products that will win the robotics market back for the US. Follow these links for more information on NASA’s work sponsoring robotics outreach: 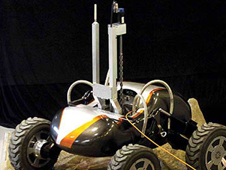 NSF, NASA and other agencies are partnering on a joint solicitation to provide grants for research in new aspects of robotics technology. Each agency has specific interests in research topics within the NRI’s co-robotics theme. NASA’s interests include: For more information on the Joint Solicitation, visit the following link: http://www.nsf.gov 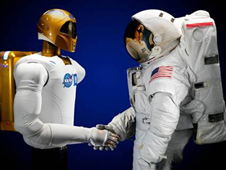 At NASA we are leading on this path to co-robotics with our GM partnership to build the Robonaut 2 (R2) system. NASA and GM share an aligned vision of robots working shoulder to shoulder with people, able to handle common tools and work together as a team. The R2 is strong enough to do work, yet safe enough to work next to people. This breakthrough in safety and dexterity has enabled R2 to be certified for work in space, and has been launched to the International Space Station (ISS), where it will be tested working with Astronauts. The R2 system has been unpacked on ISS and is scheduled for its first checkout with the crew in July 2011.

NASA is looking for similar partnerships with companies that have independent research programs and share an aligned vision for products and capabilities sought by NASA. For more information on the Robonaut partnership, visit the following link: http://robonaut.jsc.nasa.gov/default.asp 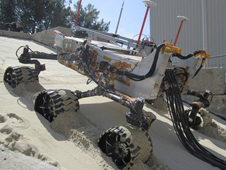 Each of the NRI’s aligned agencies has unique interests and requirements to meet their missions. The potential for robots to work with humans is now becoming a reality for manufacturing, surgery, rehabilitation, elder care, and other niche markets. The co-robotics theme will be adapted by each agency to harness and foster these new technologies.

NASA’s Office of the Chief Technologist (OCT) has commissioned a series of technology roadmaps that identify both component level needs and larger challenges and missions for the next 20 years. Of the 14 roadmaps, Technology Area 4 is titled “Robotics, Tele-Robotics and Autonomous Systems”. Several challenges are identified that are well aligned with the co-robotics theme for developing machines to help humans explore space: For more information on NASA’s OCT roadmaps, follow this link to find draft versions: http://www.nasa.gov/offices/oct/home/roadmaps/index.html

NASA Points of Contact:
NASA's involvement in the NRI is being managed by NASA’s Office of the Chief Technologist.