The three Space Shuttle Main Engines, in conjunction with the Solid Rocket Boosters, provide the thrust to lift the Orbiter off the ground for the initial ascent. The main engines continue to operate for 8.5 minutes after launch, the duration of the Shuttle's powered flight.

Image left: The Space Shuttle Main Engines provide part of the thrust that sends the Shuttle into orbit. Click image to play video of engines firing on launch (no audio). Photo credit: NASA

As the Shuttle accelerates, the main engines burn a half-million gallons of liquid propellant provided by the large, orange external fuel tank. The main engines burn liquid hydrogen -- the second coldest liquid on Earth at minus 423 degrees Fahrenheit (minus 252.8 degrees Celsius) -- and liquid oxygen.

The engines' exhaust is primarily water vapor as the hydrogen and oxygen combine. As they push the Shuttle toward orbit, the engines consume liquid fuel at a rate that would drain an average family swimming pool in under 25 seconds generating over 37 million horsepower. Their turbines spin almost 13 times as fast as an automobile engine spins when it is running at highway speed.

The main engines develop thrust by using high-energy propellants in a staged combustion cycle. The propellants are partially combusted in dual preburners to produce high-pressure hot gas to drive the turbopumps. 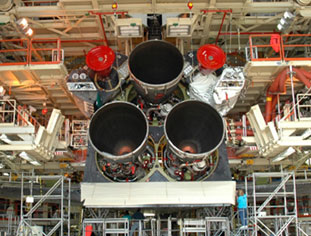 The engines can be throttled over a thrust range of 65 percent to 109 percent, which provides for a high thrust level during liftoff and the initial ascent phase but allows thrust to be reduced to limit acceleration to 3 g's during the final ascent phase. The engines are gimbaled to provide pitch, yaw and roll control during the ascent.