Grow Text SizeShrink Text Size
SWATting Trouble
If you think it's hard getting tickets to a summer blockbuster on opening night, try getting into Kennedy Space Center these days to see a Space Shuttle launch. 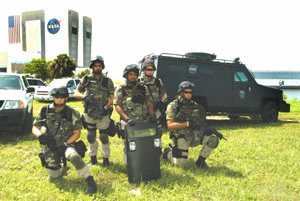 After two and a half years of anticipation, people around the world want to see NASA boost back into action and the show sells out quick. Thinking about slipping in through the back door?

Along with the formidable force of standard security at Kennedy, a highly trained and specialized group of guardians protect the Center from would-be troublemakers. They are the members of the Kennedy Space Center Special Weapons and Tactics (SWAT) team and they mean business.

"We're here 24-7," said SWAT commander David Fernandez. "There's never a point when SWAT is not here, so we're ready to respond to something if needed at a moment's notice."

NASA contracts the 29-member team from Space Gateway Support (SGS) to protect Kennedy's employees, visitors and national assets like the Space Shuttle from any potential threat. The SWAT team carefully prepares for special events like launch day and the arrival of astronauts and VIPs, but it also stands ready every day for possible problems that may arise.

Additionally, the SWAT team provides support to Kennedy security when special expertise may be needed to diffuse a dangerous situation. Skills like rappelling, defensive tactics, or marksmanship may be used to help keep the peace.

To stay sharp and fit for their job, members of the team have to pass annual physical fitness tests and maintain updated certifications for using their weapons.

"The training that we do out here is very intense sometimes," Fernandez said. "But that's because we're at a stage which could be considered by some to be advanced. The training has to be more intense and challenging."

As a part of staying in shape, members of the Kennedy Space Center SWAT team participate in competitions with the most elite teams around the world. SWAT officers hone their skills in events testing their speed and accuracy with special weapons and equipment. Last year, the team from Kennedy placed 12th out of 80 teams at the annual SWAT Roundup in Orlando, Fla.

Members of the SWAT team admit that one of the best parts of their job is getting the "big-boy toys." But senior officer Eric Munsterman said there is also a rewarding bond they share with one another.

Image right: As shown on the logo, the SWAT team has protected Kennedy Space Center since 1979. Image credit: NASA/KSC

"In the civilian world, outside of police work or fire work, I don't see where you’re going to find [camaraderie] as strongly as we develop it," Munsterman said.

They may have their differences during the week, but when they suit up and go to work, that all goes away, Munsterman said.

Through a strong commitment to each other, members of the SWAT team ensure things at Kennedy stay safe. If you plan to come see a Space Shuttle launch, make sure you have a ticket.

"If anybody means harm to the astronauts or anyone else that works out here, they're not getting past us," Munsterman said.