Grow Text SizeShrink Text Size
Red Water Sausages
Lying brilliantly at the base of the Space Shuttle on the launch pad is a curious pair of rectangles that look like two swimming pools filled with large red sausages. Along with the bright orange External Tank towering into the sky, these rose-colored curiosities are a stark contrast to the launch pad’s muted tones of white, black and shades of steel gray.

What are these interesting eye-catchers at the base of the Solid Rocket Boosters? While they may look like dozens of sausages, it’s doubtful that NASA is using Space Shuttle launches as an excuse for a giant wiener roast.

Actually, these red “sausages” are large nylon bags – each about one foot wide and one foot deep – filled with water and stretched across the Solid Rocket Booster flame holes. These bags are part of the Sound Suppression Water System designed to protect the Space Shuttle from damaging acoustical energy during launch. 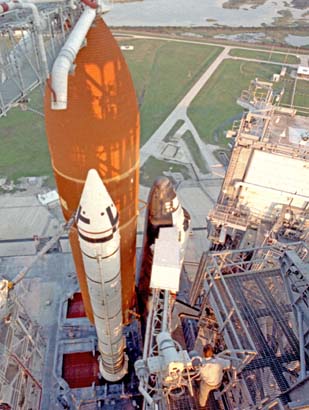 Image left: The Space Shuttle stands ready at the pad for launch. The red rectangles at the base of the Solid Rocket Boosters are a series of nylon bags filled with water and serve as part of the Sound Suppression Water System. Image credit: NASA/KSC

Specifically, the red water bags are used to dampen the wave of sound energy that is reflected back up toward the Space Shuttle when the Solid Rocket Boosters ignite during launch. If this powerful pulse of pressure were not suppressed, it would create a dangerous stress on the wings of the orbiter.

Along with these bags, a water spraying system directs a cushion of water into the flame holes of the Solid Rocket Boosters. This cushion serves as a barrier to the reverberated pressure pulse. At its peak output during launch, this system pumps water at a rate of 15,000 gallons per second.

Together, the nylon bags and water spraying system greatly reduce the intensity of the reflected sound energy and the threat of damage to the orbiter.

While many things involved in launching a Space Shuttle can be reused, the red water “sausages” are not among them. Part of standard post-launch cleanup procedure involves picking bits of red nylon from the perimeter fence and the area around the launch pad.

So, if you hear someone talking about red sausages in connection with the Space Shuttle, now you’ll know what all the noise is about.