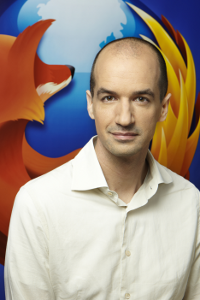 Pascal is the Director of Mozilla Labs, where he works with an incredibly talented team of engineers inventing the future of the Web. He loves technology and believes that the Internet is deeply impacting mankind. Prior to Mozilla, he led eBay's Platform Solutions Group, consulted a bunch of entrepreneurs on their strategy & operations and invested into startups, among other things. Pascal frequently speaks about Open Innovation on the Web.