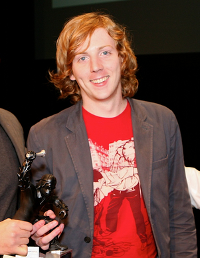 Chris Wanstrath is the CEO and a co-founder of GitHub, the largest software code hosting site in the world. Before bootstrapping the company from nothing to profitability with his fellow co-founders, Chris ran a successful Ruby on Rails consulting shop alongside Rails expert and entrepreneur PJ Hyett (also a GitHub co-founder). Together they helped launch startups, scale websites, and identify the problems that GitHub would eventually solve.

While consulting Chris contributed chapters to technical books such as "Advanced Rails Recipes" and, again with PJ Hyett, co-authored a popular yet provocative Ruby and Rails blog titled "Err the Blog." Many of the ideas presented on that blog still exist as idioms in the Ruby ecosystem today. Prior to his Ruby period Chris worked at CNET Networks on the code that powered GameSpot, TV.com, and MP3.com, where he learned the power of community and the value of fast, iterative business development.

A college dropout, Chris is an outspoken open source advocate with hundreds of contributions to open source projects. Currently he travels the world speaking about the power of open source to developers and the potential of networking to fellow entrepreneurs. He's given keynote talks at the International RailsConf, Startup Riot Atlanta, Rails Summit Latin America, and more while speaking at a variety of regional and international conferences.

Chris was recently named one of BusinessWeek's "30 under 30" young entrepreneurs to watch while GitHub won TechCrunch's "Best Boostrapped Startup" in 2009.