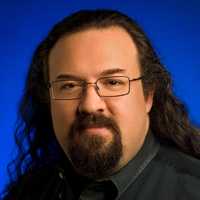 Chris DiBona is the open source and public sector programs manager at Mountain View, Ca. based Google. His team oversees license compliance and supports the open source developer community through programs such as the Google Summer of Code and through the release of open source software projects and patches. In the public sector space, he looks after Google Moderator, the polling locations API. Additionally, he is on the board of Our Good Works, a non-profit that looks after the volunteer matching website Allforgood.org.

DiBona is an internationally known advocate of open source software and related methodologies. He occasionally appears on the This Week in Tech and Cranky Geeks podcasts. He is a visiting scholar at the MIT Sloan School of Management and has a masters in software engineering from Carnegie Mellon University. Additionally, he serves on the advisory board of imeem, a San Francisco, Ca. based social networking firm.

Before joining Google, DiBona was an editor and author for the website Slashdot.org . Additionally, he coedited the award-winning essay compilations "Open Sources" and "Open Sources 2.0" and writes for several publications. He was the host of Floss Weekly with Leo Laporte and made a number of appearances on TechTV's "The Screensavers"