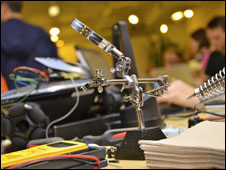 NASA OCIO supported and actively participated in Science Hack Day in Palo Alto, CA on November 13th and 14th. The event was attended by over 100 "makers" - an emerging class of "hackers" who blur the line between raw science data and the physical world with an interest in bringing science and technology together. Scientists, engineers, developers and designers formed 15 teams who developed, soldered, constructed, assembled and presented some impressive projects. One team mapped an area larger than a football field with a Helium-filled balloon and a GPS-enabled iPhone. Another strapped a homemade spectrometer onto an Android-controlled rover, demonstrating how citizen scientists could affordably contribute to telerobotic expeditions. Some teams focused on how to make science "real" for everyone, encoding hardcore data like DNA sequences and asteroid trajectories into everyday objects such as colorful desk lamps and neckties. Another theme was to teach science in new ways, demonstrated by a location-driven mobile phone trivia game and an interactive presentation that gave the user an entertaining way to experiment with the sequencing of a pigeons flock's DNA. The event provided NASA's Open Government team valuable feedback and insight into how to make NASA data more available and accessible.

For photos from the event, visit: http://bit.ly/bCcwgR