NASA has a strong track record of archiving and providing universal access to science data products from its science missions and programs. We will build on this tradition to enhance the quality, accessibility, and usability of NASA's science data holdings for scientists, educators, and the general public. We will continue to engage the community to evolve the science data environment with advanced capabilities and enhanced services through open solicitations and calls for participation. To the maximum practicable extent , we will collaborate with other Federal Agencies and the private sector to blend innovative efforts and emerging technologies toward a seamless national information infrastructure. 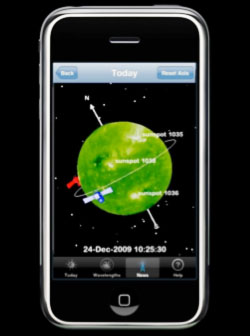 This iPhone application delivers a live global view of the Sun directly to your cell phone. A major solar flare erupts on the Sun. Before long, your phone chirps in your pocket to let you know! On the screen, you see a three-dimensional view of the Sun—a digital reconstruction of real-time satellite images freshly downloaded from NASA's twin STEREO spacecraft, orbiting millions of miles away from locations ahead and behind Earth. 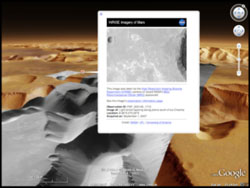 NASA can reach vast audiences by leveraging freely available and widely adopted "geo-browser" tools using open standards like Keyhold Markup Language (KML). This is how data was prepared for the three-dimensional Moon, Mars, and Sky modes that are available as part of the Google Earth 5 software. These modes, developed under a partnership between NASA and Google, feature many of NASA's high value data sets and provide a rich, immersive 3D view of the cosmos. Google Moon, Mars, and Sky aid public understanding of planetary science and astronomy and provide researchers with a platform for sharing data using the same open standards. Most importantly, it allows members of the public to participate by sharing their own content on top of NASA's built-in data layers in a visually stunning and intuitive way.

As a matter of longstanding policy and practice, NASA archives all science mission data products to ensure long-term usability and to promote wide-spread usage by scientists, educators, decision-makers, and the general public. Our vision is to facilitate the on-going scientific discovery process and inspire the public through the body of knowledge captured in these public archives. The archives are primarily organized by science discipline or theme. Communities of practice within these disciplines and themes are actively engaged in the planning and development of archival capabilities to ensure responsiveness and timely delivery of data to the public from the science missions.

The Planetary Data System (PDS) originally developed in the 1990s provides access to data from more than 50 years of planetary science missions via distributed topical nodes at seven research institutions. Astrophysics science archives have been established in a wavelength-specific structure alongside the Astrophysics Great Observatories, which include the Hubble Space Telescope, the Chandra X-Ray Telescope, and the Spitzer Infrared Space Telescope. The astrophysics data centers in turn have formed the foundation pieces for the Virtual Astronomical Observatory, or the seamless view of the digital sky in all wavelengths. The evolving Heliophysics Data Environment provides access to data and physics-based models that facilitate a systems level understanding of the Sun and its impact on our solar system.

Perhaps the most notable endeavor in this regard is the Earth Observing System Data and Information System (EOSDIS), which processes, archives, and distributes data from a large number of Earth observing satellites and represents a crucial capability for studying the Earth system from space and improving prediction of Earth system change. EOSDIS consists of a set of processing facilities and data centers distributed across the United States that serve hundreds of thousands of users around the world.

We promote broader utilization of our science data archives beyond the original investigators by increasing awareness of and ease of access through Web services and applications programming interfaces (APIs). The Earth Observing System (EOS) Clearinghouse (ECHO www.echo.nasa.gov) is one such effort to promote broader use of Earth science data. ECHO is a spatial and temporal metadata registry that allows users to more efficiently search and access data and services and increases the potential for interoperability with new tools and services. We also have an extensive set of education and public outreach efforts that build on the science data archives to engage and excite students and the general public to use the data in citizen science endeavors. The "My NASA Data" site is one such effort to mentor teachers and amateurs in using atmospheric and Earth science data. (mynasadata.larc.nasa.gov )

Finally, we support ever-increasing public participation by providing science datasets in software applications on the Web, mobile phones, and other personal devices. These applications include desktop geographical-browsers such as Google Earth and World Wide Telescope (WWT) and Web applications like Galaxy Zoo. WWT is a rich visualization environment that functions as a virtual telescope, allowing anyone to make use of professional astronomical data to explore and understand the universe. Galaxy Zoo is very effective "crowd-sourcing" effort that has significantly enhanced the use of the science datasets. These platforms collectively reach millions of users worldwide, and provide exciting new capabilities for browsing data sets and soliciting broad public participation in science data analysis on a scale that has not previously been possible.

How This Fits into Open Government

Our science programs are predicated on the fundamental Open Government tenets of openness, transparency, and collaboration. We share the excitement of science with the public and engage them as virtual participates in our missions. There is a rich legacy of virtual participation via the Internet, including the "Encounter for Every Person" in 1996 that allowed people from around the world to download near real-time Hubble Space Telescope images when Comet Shoemaker-Levy collided with Jupiter. Images from the Mars Pathfinder mission, along with those from the Mars Rovers and the Mars Reconnaissance Orbiter, have engaged and excited people around the world in virtual exploration of the solar system. We will continue to evolve the science information infrastructure to build on this legacy and enhance and extend our public engagement. NASA also has extensive education and public outreach efforts that build on the science data archives to engage and excite students and the general public to use the data in citizen science endeavors. The My NASA Data site is one such effort to mentor teachers and amateurs in using atmospheric and Earth science data.