Letter from the CIO and CFO: Open Government at NASA

A Letter to Transparency Advocates


"Participatory exploration" is the active involvement of individuals as contributors to and collaborators in NASA's research, science, and exploration activities. Participatory Exploration embodies far more than simply exposing people to or educating them about NASA's discoveries and exploration activities. It encourages individuals to contribute their creativity and capabilities to NASA's mission of discovery and invites them to share in the excitement of building our future. The FY 2011 President's budget proposes that NASA will create a Participatory Exploration Office to support research on new technologies to increase public participation, coordinate NASA-wide efforts to incorporate new participatory exploration approaches into future work, and act as a clearinghouse for identifying and communicating best practices both internally to NASA and externally to our communities.

Clickworkers and Be A Martian
beamartian.jpl.nasa.gov 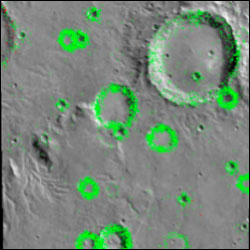 In 2000, NASA scientists created a small experimental project that uses public volunteers (nicknamed "clickworkers") for scientific tasks that require human perception and common sense but not a lot of scientific training. Originally used to count craters on celestial bodies, this technique crowd sources tasks to many people and statistical corrections aggregate the input into a format of scientific utility for researchers. The Clickworkers underlying technology has been used for crowd sourcing geological features on celestial bodies shown in the data received from Mars Global Surveyor, Dawn, and Mars Reconnaissance Orbiter (MRO) Hi-RISE camera. In 2009, NASA partnered with Microsoft Corp. to create an experience for the public to participate as citizen scientists and experience Mars through improving maps, taking part in research tasks, and assisting Mars scientists by counting craters. 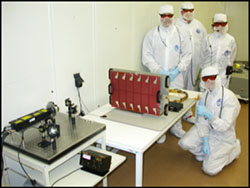 The Student Dust Counter (SDC) was designed and built by University of Colorado students, and is aboard NASA's New Horizons spacecraft on its way to Pluto. SDC maps dust in the solar system to understand the density and variation of dust particles as the spacecraft travels across the solar system. SDC is a "secondary science payload" which is placed on the spacecraft as long as it doesn't interfere with achieving the primary mission objectives. Successfully integrated and launched along with New Horizons, the instrument is now operated by the students. SDC is part of the education and public outreach plan for the New Horizons mission and is an example of participatory exploration.

A key requirement included in the Space Act is for NASA to act as an engine of innovation and to widely disseminate its knowledge and technologies. We sponsor hundreds of programs, activities, events, and resources, including award-winning Web sites, collaborations with museums and science centers, strategic partnerships, and research projects that allow the public to learn about, and in some cases, participate in our missions. We have been successful in developing, implementing, and sustaining quality education and outreach programs.

Our employees continuously experiment with new technologies and methodologies to engage the public in our mission to feel like they are a part of space exploration. Over the years, various projects have embraced crowd sourcing tools and methodologies to allow people to contribute in meaningful ways to our projects. This has evolved into a new way for the interested and talented public to go beyond being simply recipients of public outreach information and experiences and to become part of our missions without being a NASA employee or on a funded science team. By increasing the ways in which the public can directly and specifically contribute to NASA missions, NASA can bring additional creativity and capability to some of our biggest challenges. We call this concept "participatory exploration."

In 2007, NASA recognized how access to information and collaborative behavior online was changing business and the very nature of how people interact and work. A day-long Participatory Exploration Summit convened NASA employees and leading thinkers outside NASA to explore ways to apply this thinking to NASA's mission. We formed an informal community within NASA and began collaborating over social media and at conferences to promote greater adoption of participatory exploration within NASA's missions. The concept began to spread, and many education and outreach initiatives have embraced participatory elements in their programs. A Web site, www.nasa.gov/connect was created to access participatory projects through the Agency.

In the 2008 NASA Authorization Act (released in 2009), Congress directed NASA to develop a Participatory Exploration Plan, calling for NASA to "develop a technology plan to enable dissemination of information to the public to allow the public to experience missions." The FY 2011 Budget calls for NASA to "establish a Participatory Exploration Office, funded at $5 million a year, with the goal of making NASA missions more participatory and even more collaborative."

A cadre of passionate personnel from across NASA has formed to plan and structure the Participatory Exploration Office. The Office will support research on new technologies that can increase public participation, coordinate NASA-wide efforts to incorporate new participatory exploration approaches into future work, and act as a clearinghouse for identifying and communicating best practices both internally to NASA and externally to our communities. The activities the Office supports and coordinates will help empower citizens to become not just consumers of NASA innovation but co-creators of knowledge and ideas to advance space exploration.

How This Fits into Open Government

The Participatory Exploration Office will serve as an internal resource to use appropriate technologies and methodologies to allow the public to participate in NASA's missions. In some cases it may be contributing to the creation of new missions, supporting engagement with existing missions and data, or to contributing innovative ideas and solutions to grand challenges. As more aeronautics research and space exploration missions are conducted with public participation, NASA envisions a greater return on science and technology investment. This in turn may free up more resources for additional research projects. Active engagement of the public may inspire today's scientists and engineers, as well as the next generation of explorers. It also reflects the increased relevancy of our activities to individuals.

One of our objectives in improving public participation is to encourage a broader segment of the population to become aware of and interested in the formal study and pursuit of a career in science, technology, engineering and math (STEM) as a method of promoting economic vitality. Additionally, giving individuals opportunities to participate in NASA missions gives them a first-hand look into the inner-workings of NASA.

The Office will actively collaborate, both internally and externally with other agencies, non-profit organizations, and corporations, to identify opportunities to work with or leverage activities that they are fostering. Finally, the Office will focus on creating metrics and models which will help us to operate efficiently and effectively, and which may be beneficial to other government agencies.