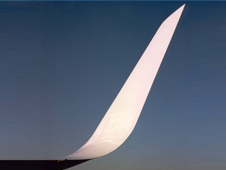 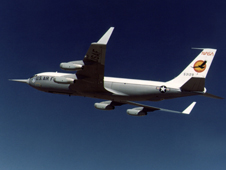 During the 1970s, the focus at Dryden Flight Research Center shifted from high-speed and high-altitude flight to incremental improvements in technology and aircraft efficiency. One manifestation of this trend occurred in the winglet flight research carried out on this KC-135 during 1979 and 1980.
›  Link to larger photo 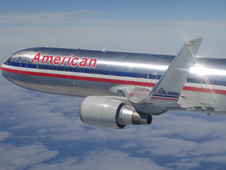 Aviation Partners Boeing manufactures and retrofits Blended Winglets for commercial airliners. The technology typically produces a 4- to 6-percent fuel savings, which can translate to thousands of gallons of fuel saved per plane, per year.
›  Link to larger photo A seemingly simple, NASA-proven wingtip feature is saving airlines billions of dollars in fuel costs

The next time you snag a window seat on an airline flight, check out the plane’s wing. There is a good chance the tip of the wing will be angled upward, almost perpendicular. Or it might bend smoothly up like the tip of an eagle’s wing in flight. The origin of this decidedly stylish design feature traces back to NASA. But looks aren’t everything.

By 1977, Whitcomb’s ideas were validated through flight tests at Dryden Flight Research Center, and his research began to popularize the winglet technology now found on airplanes around the world.

Saving Fuel is Hardly a Drag

Anyone who has made a paper airplane knows that folding the wingtips upward makes your plane look better and fly farther, though the reasons for the latter might be a mystery. Though obviously more complex, the wing modifications you see on an airplane have the same aerodynamic function. More than an aesthetically pleasing design feature, they are among aviation’s most visible fuel-saving, performance-enhancing technologies.

One variety of winglet—the Blended Winglet—reduces drag even further. A creation of Seattle-based Aviation Partners Inc., the blended winglet now features on Boeing aircraft flown by major commercial airlines around the world.

“Fuel is a huge direct operating cost for airlines,” explains Mike Stowell, chief technical officer of Aviation Partners Boeing (APB), a partnership between the companies. “Environmental factors are also becoming significant. If you burn less fuel, your emissions will go down as well.”

The Numbers Tell the Story

Blended Winglets offer between 4- and 6-percent fuel savings and provide up to a 6-percent reduction in carbon dioxide emissions and an 8-percent reduction in nitrogen oxide, an atmospheric pollutant. But if the single-digit percentages of savings seem insignificant on their own, consider how they add up: Blended Winglet technology has saved more than 2.6 billion gallons of jet fuel worldwide. This represents a monetary savings of more than $4 billion and an equivalent reduction of almost 21.5 million tons in carbon dioxide emissions. APB predicts total fuel savings greater than 5 billion gallons by 2014.

Consider other winglet designs on commercial carriers, as well as blended and other winglets on smaller jets and general aviation aircraft, and the impact of the original NASA research takes on even greater significance.

“Those flight tests put winglets on the map,” says Stowell.