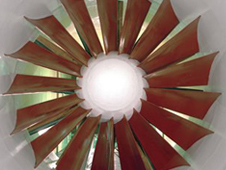 By shaving the Icing Research Tunnel’s wooden fan blades in accordance with the results of Larry Viterna’s model, Glenn engineers boosted the tunnel’s top wind speed by over 130 miles per hour.
›  Link to larger photo 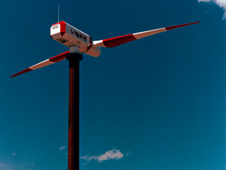 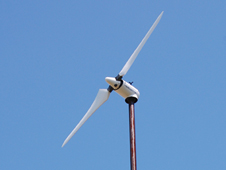 Wind turbines like this Aerostar model are stall regulated, a feature enabled by the Viterna model.
›  Link to larger photo

One morning in 1990, a group of Glenn Research Center (then Lewis Research Center) employees arrived to find their workspace upended by an apparent hurricane. Papers were scattered, lights blown out.

The employees did not know it, but they had Larry Viterna to thank for the state of their workspace. An innovation by the NASA researcher may have led to an accidental disaster in their office, but it would go on to benefit the entire field of wind energy.

Glenn already had a history of energy research and had assumed the lead role in the nation’s wind energy program when Viterna joined the Center in 1977. NASA’s goal was to develop technology for harnessing the wind’s power and to transfer it to private industry.

Despite the advances made by the NASA-led program, there were still significant challenges. Wind turbines, especially in high-wind conditions, can routinely stall, limiting the ability of the turbine to produce electricity. The inability to properly predict stall behavior led to inefficient designs and costly turbine failures.

A Pair of Surprises

The model was not well accepted by colleagues in the wind energy field, Viterna remembers. “I almost got laughed off the stage when I presented it,” he says. Viterna, however, continued to employ the model for NASA’s purposes, even using it to improve Glenn’s Icing Research Tunnel, designed to study the effects of ice buildup on aircraft. During a nighttime test, the wind tunnel’s pressure release door flew open, sending 400-mph winds ripping through the adjoining work area.

The surprise Viterna’s coworkers encountered the following morning was on par with what Viterna experienced during a random Internet search nearly 25 years after inventing his model. He discovered his initially criticized model had, within a decade of its creation, quietly become the established method of modeling the performance of wind turbine airfoils in stall conditions.

A Method for Success

The “Viterna Method” is now routinely used by research institutions and turbine manufacturers alike in the design and certification of modern wind turbines.

“The model makes it possible for manufacturers like us to predict and characterize the performance of airfoils for these turbines,” says Paul Gay of turbine developer Aerostar Inc.

The method is even finding applications beyond horizontal wind turbines; Viterna’ once-mocked model is now employed for vertical wind turbines, wind tunnels, and underwater turbines that make use of tidal energy to produce power.

The Agency can also expect to see a resurgence of its early work, predicts Sandy Butterfield, wind program chief engineer at the National Wind Technology Center.

“As the industry moves forward and becomes more competitive and broad, you will see efforts to explore lower cost, more structurally efficient machines, and that’s when people will begin to capitalize again on that good work NASA did in the early 1970s and 1980s,” he says.

That is good news for the advancement of alternative energy, and for the dedicated researchers at Glenn—so long as this does not involve another office destroyed.

To learn more about this NASA spinoff, read the original article from Spinoff 2009: http://www.sti.nasa.gov/tto/Spinoff2009/er_3.html
› Back To Top