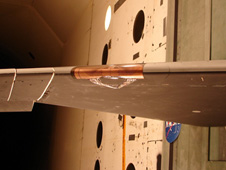 The next time you blow out a candle, watch how the smoke behaves. You will see that it rises first in an even stream. At a certain point, that stream begins to break up into swirls and eddies as the smoke disperses.

Air flowing over a wing acts in a similar way. The smooth, even movement of air over a wing is what allows aircraft to fly efficiently. Airflow that separates from the wing’s surface breaks up into turbulence, which is responsible not only for those moments of bumpy discomfort during flights but also increased drag, which reduces aircraft performance. Understanding and controlling the influence of these aerodynamic forces on a wing can lead to aircraft that fly more safely, use less fuel, and carry greater payloads.

Currently, the impact of aerodynamic forces on an aircraft is understood only after the fact; turbulence, for example, is only detected after the aircraft’s structure responds to it.

“Turbulence can be very fast acting, while the structure is slow acting,” says Siva Mangalam, former Langley Research Center aerodynamics researcher and founder of Tao of Systems Integration Inc., based in Hampton, Virginia. This means that not only do researchers not know the true aerodynamic conditions influencing an aircraft in flight, but neither do pilots. The ability to detect changes in aerodynamic forces before the aircraft’s structure responds can lead to better control systems and safer, more efficient, and more comfortable flight.

With the support of multiple NASA contracts and flight testing opportunities with Dryden Flight Research Center, Tao Systems began crafting sensors and other components with the ultimate goal of developing a first-of-its-kind system to detect, measure, and control aerodynamic forces in flight.

The system utilizes sensors that allows the real-time collection of aerodynamic data. These sensors are currently providing solutions for customers such as Boeing, Lockheed Martin, Northrop Grumman, BMW, and Rolls Royce, who have employed them for measuring airflow and temperature characteristics for vehicle design. Sandia National Laboratories are using the company’s technologies to explore ways of improving wind turbine operation. Tao Systems’ technologies are also employed for examining airflow in buildings to determine ways to save energy by optimizing air conditioning use.

“Wherever there is airflow, the opportunities are plenty,” says Mangalam. But he is quick to note the usefulness of his company’s technologies underwater as well, for developing and improving underwater turbines generating electricity from waves and tidal forces.

While Tao Systems’ customers continue to make use of its innovations, the company has its eye on the potential benefits a completed flight control system will offer. Once the system is available, engineers will be able to use it to develop advanced adaptive control systems and flexible wing structures, allowing an aircraft to respond to—and even take advantage of—aerodynamic conditions as they happen, improving flight safety and comfort and increasing fuel efficiency. Advancements like this would provide human aviation with capabilities closer to those of nature’s perfect aerodynamic creation.