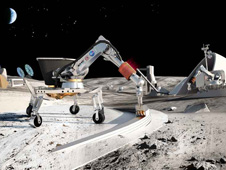 The Contour Crafting Simulation Plan for Lunar Settlement Infrastructure Build-Up, a NIAC-supported concept.
Rendering courtesy of Behnaz Farahi and Connor Wingfield
›  Link to larger photo
As the rocket flies, Earth’s Moon is just a few days of travel away. While NASA Apollo astronauts made repeat treks to the barren lunar surface in the 1969-1972 time period, those fleeting footfalls were but a prelude to what some think a 21st century Moon might look like.

The now foreboding lunar landscape could be crisscrossed with roads, dotted with landing and departure pads, as well as other structures that signal humankind’s firm foothold on another world.

A radically different approach to spur settlement of the Moon is proposed by Berok Khoshnevis, a professor of industrial and systems engineering at the University of Southern California’s Viterbi School of Engineering.

The visionary concept of Khoshnevis is being supported under the NASA Office of the Chief Technologist’s (OCT) Innovative Advanced Concepts (NIAC) program. As a newly awarded NIAC Fellow, his winning proposal is called “Contour Crafting Simulation Plan for Lunar Settlement Infrastructure Build-Up.”

Khoshnevis explains that most proposals for building lunar outposts are based on transporting prefabricated modules from Earth and then putting them together on the spot. But that approach is very costly, he quickly adds, particularly if a long-term target is to continuously expand operations on the Moon.

The forward looking concept by Khoshnevis makes use of automated construction technology that’s pre-planted on the Moon, a capability tailored to fabricate infrastructure on the lunar surface layer by layer, in a swift and reliable manner.

Khoshnevis began work on Contour Crafting (CC) technology in 2000, a pioneering effort that was acclaimed in 2006 as one of the top 25 inventions by the National Inventors Hall of Fame.

Thanks to the NIAC-supported research, Khoshnevis is adopting CC automated building technology for an extraterrestrial setting.

“The Moon offers unique opportunities because it provides for realistic and feasible experimentation with planetary exploration and colonization,” Khoshnevis says. “It also offers valuable resources, a clear view of the heavens, and a stable post for communication platforms.”

To further showcase the power of CC technology for off-Earth uses, Khoshnevis and his colleagues are drawing up a detailed plan for a high-fidelity simulation at NASA’s Desert Research and Technology Studies facility in Arizona. That simulation would also encompass a number of NASA-matured systems, such as habitat module mockups, various lunar rover designs, as well as the space agency’s versatile light-weight crane and Tri-Athlete cargo transporter.

Furthermore, a key ingredient to building structures on the Moon is making use of local materials. That’s known as “in-situ resource utilization” – or in NASA lingo, ISRU for short.

Indeed, one research avenue that the NIAC-supported team is taking is a nozzle system that would heat up simulated lunar soil into a paste, something akin to cement that can be tested here on Earth in CC equipment, even utilized to build small structures.

“Our proposed approach capitalizes on seamless integration with NASA’s existing robotics and material excavation and processing capabilities,” Khoshnevis explains. “It is a sustainable approach because it allows for practically unlimited expansion of lunar settlements using local energy and materials without requiring additional transport of major components and materials from Earth, he adds.

The work by Khoshnevis and his team centers on rapid buildup of an initial operational capability for a lunar base. This farsighted endeavor would literally build upon the Apollo visitations of the past to create an enduring home-away-from-home for humanity.
› Back To Top