Shown here is the Skylab food heating and serving tray with food, drink, and utensils. While this represented a great improvement over the food served on earlier space flights, NASA researchers still had plenty of room for progress.
›  Link to larger photo 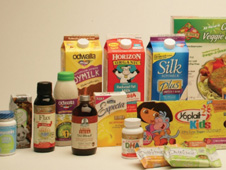 NASA experiments into plant growth for long-duration space flights led to the identification and manufacturing method for a nutritional supplement now found in everyday foods.
›  Link to larger photo

There is a good chance that space technology is a part of you—literally. It might have been in a meal you ate recently, or, years ago, your parents might have fed it to you while you were still an infant. You and millions of others around the world have probably benefited from this spinoff—thanks to the challenges of space exploration, some special kinds of algae, and a healthy amount of NASA research.

Keeping crews safe and healthy for extended periods of time in space poses problems for which NASA scientists are constantly seeking new answers. The obstacles include maintaining long-term food supplies, clean air and potable water, and developing efficient means of waste disposal, all within the constraints of a spacecraft thousands of miles from Earth—and getting farther every minute.

One NASA experiment involved developing contained, living, regenerative ecosystems that would take care of themselves and their inhabitants—recreating Earth-like conditions. Years later, this effort has evolved into one of the most widespread NASA spinoffs of all time.

In the 1980s, Baltimore-based Martin Marietta Corporation worked with the Agency to test the use of certain strains of microalgae as part of the NASA experiment. Martin Marietta scientists realized that the algae’s properties were valuable to people not only in space, but here on Earth— as a nutritional supplement. Fueled by this discovery, in 1985 the scientists formed Martek Biosciences Corporation, in Columbia, Maryland.

The primary discovery Martek made while exploring properties of microalgae for use in long-duration space flights was identifying a strain of algae that produces docosahexaenoc acid (DHA) naturally and in high quantities. Using the same principles, the company also patented a method for developing another fatty acid that plays a key role in infant health, arachidonic acid (ARA).

DHA is an omega-3 fatty acid, naturally found in the body, which plays a key role in infant development and adult health. Most abundant in the brain, eyes, and heart, it is integral in learning ability, mental development, visual acuity, and in the prevention and management of cardiovascular disease. Breast milk is a chief source for DHA for children. Studies have shown that adults, too, need DHA for healthy brain functioning. To this end, Martek’s NASA spinoff is also a nutritional additive to a wide variety of food products, from eggs and bread to milk, orange juice, yogurt, and cooking oil.

DHA is also vital for visual development and ocular health, and the U.S. Food and Drug Administration has found that DHA consumption may reduce the risk of coronary heart disease.

Today, Martek is a major player in the nutrition field, with over 525 employees and annual revenue of more than $300 million. The reach of the company’s space-developed product, though, is what is most impressive. Martek’s life’sDHA and life’sARA products can be found in 99 percent of the infant formulas sold in the United States, and are added to the infant formulas sold in over 75 additional countries. With such widespread use, the company estimates that over 50 million babies worldwide have consumed its nutritional additives, another example of how NASA research intended to sustain life in space has found its way back to Earth, where it is improving the lives of people everywhere.

To learn more about this NASA spinoff, read the original article from Spinoff 2008.
› Back To Top