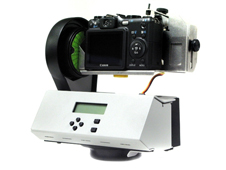 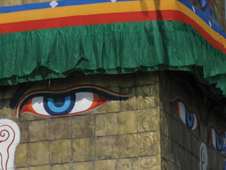 Gigapan allows a photographer to capture extremely high-resolution panoramas, which a user can explore in depth. In this wide view of Boudhanath Stupa in Kathmandu, Nepal, it is possible to zoom all the way into the smallest, barely visible points in the picture, such as the monk standing on the roof of the temple or the sign above the Tibet Kitchen Restaurant and Bar.
Gigapan panoramic image courtesy of Jessee Mayfield
› Link to larger photo

If you wish to survey a Martian landscape without leaving your armchair, a few simple clicks around the NASA website will lead you to panoramic photographs taken from the Mars Exploration Rovers. Mounted atop each rover are Pancams—camera assemblies that can tilt a full 180 degrees and swivel 360 degrees, allowing for a complete, highly detailed view of the Martian landscape.

The rover Pancams take small, 1 megapixel (1 million pixel) digital photographs, which are stitched together into large panoramas that sometimes measure 4 by 24 megapixels. The Pancam software performs some image correction and stitching after the photographs are transmitted back to Earth. These photographs from Mars spurred developers to begin thinking in terms of larger and higher quality images: super-sized digital pictures, or gigapixels, which are images composed of 1 billion or more pixels.

Today, many of the technologies that enable this spectacular Mars photography have also inspired advancements in photography here on Earth—including one innovation that is allowing people to explore our home planet in unprecedented detail.

From Bird’s Eye to Bug’s Eye

The technology behind the Mars rover Pancams inspired Randy Sargent at Ames Research Center and Illah Nourbakhsh at Carnegie Mellon University (CMU) to look at ways consumers might be able to use similar technology for more “down-to-Earth” photography and virtual exploration. Sargent created a prototype for a consumer version of a robotic camera platform. He worked with Charmed Labs LLC, in Austin, Texas, to design and manufacture the Gigapan robotic platform for standard digital cameras.

The Gigapan robotic platform is, in essence, an intelligent tripod that enables an amateur photographer to set up detailed shots with ease. With this level of automation, a 500-picture panorama is no more complicated than a 4-picture panorama; only the camera’s memory limits the size of the panorama.

On the Gigapan website or through the GigaPan iPad app, a user can display a wide, bird’s eye panorama and can then zoom in with impressive bug’s eye, high-quality detail. With each successive click, the user can zoom deeper and deeper into the photo, revealing more and more details.

As part of a continuing effort to connect people and cultures, the Global Connection Project encourages all users to upload their own panoramas from around the world on the Gigapan site. Users can explore such varied landscapes as a temple in Nepal, a market in Guatemala, or the Boston skyline from the Charles River. Several images, such as of the 2008 Presidential Inauguration, have made headlines. Scientists are using Gigapan to document life in the upper redwood forest canopy in California, volcanoes in Hawaii, and glaciers in Norway.

This NASA spinoff is even bringing panoramic detail to the small scale. The Nano GigaPan website provides examples of remarkable GigaPan resolutions applied to the very small, such as the body of an ant or a drop of blood—allowing people to explore worlds every bit as strange and remarkable as the surface of Mars.

Gigapan™ is a trademark of Carnegie Mellon University.

To learn more about this NASA spinoff, read the original article from Spinoff 2008: http://www.sti.nasa.gov/tto/Spinoff2008/ch_2.html
› Back To Top