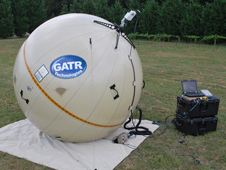 The GATR satellite communication system takes about 45 minutes to set up and 15 minutes to take down. It provides Internet access, voice over Internet protocol, broadcast television, and other high-bandwidth communications. 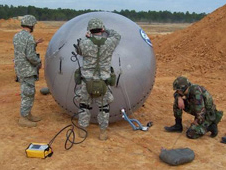 When you leave your cell phone at home, you probably get nervous. What if something happens and you need to make a phone call? Even a quick trip to the grocery store can make you feel vulnerable. But when astronauts go into space, ready communication is a vital need. No one will ever go to Mars, or even low-Earth orbit without reliable and efficient communication technology.

One device currently under development for space communication is the inflatable antenna. Because it is lightweight, easy to deploy, inexpensive, and requires low storage volume, inflatable technology is extremely attractive for space applications.

Paul Gierow, one of the engineers with SRS at the time, explains, “To make a solar concentrator, you point it at the Sun and focus the energy. The antenna is exactly the same thing, but instead of focusing it on the Sun, you point it at a satellite that is radiating radio frequency energy,” says Gierow.

With the help of SBIR funding, SRS modified the concepts and processes for ground-based inflatable antennas. “We came up with an idea to put an antenna in a ball, or sphere. Intuitively you don’t think it will work, but it did,” says Gierow.

In 2004, GATR (an acronym for “Ground Antenna Transmit and Receive”) Technologies, of Huntsville, Alabama, licensed the technology from SRS. GATR refined the product further, which led to a ground-based satellite communications system.

In 2008, the inflatable antenna was the first-of-its-kind to receive Federal Communication Commission certification, which qualified the antenna for applications within NASA, other government agencies, and commercial entities. In 2010, the system earned recognition as one of the R&D 100 (a list of the top 100 inventions of the year), granted by R&D Magazine.

Capable of providing Internet access, voice over Internet protocol, e-mail, video teleconferencing, broadcast television, and other high-bandwidth communications, GATR’s inflatable antenna can be quickly deployed in remote, hard-to-reach areas. The complete system takes only 45 minutes to set up and 15 minutes to take down. When deflated, the system fits in two airline-checkable cases that weigh less than 90 pounds each.

“The fact that you can hand carry these communications terminals onto a roof and set them up rapidly is a main benefit of the technology,” says Gierow, now the president of GATR Technologies.

GATR systems have been deployed in the United States, Korea, Africa, Iraq, and Afghanistan. Popular with U.S. military and intelligence agencies, the systems have been used in missile ranges, severe weather, and emergency response situations. On a volunteer basis, GATR has used the communication systems to enable high-speed Internet and phone access during wild fires in southern California. After Hurricane Katrina, Gierow spent a week in Mississippi helping residents and law enforcement officials with their communication needs. In 2010, GATR provided Internet access to first responders and doctors following the earthquake in Haiti.

Since its beginnings, GATR has sold more than 60 ground-based inflatable antenna systems, and revenue has increased from $3 million in 2008 to $5.6 million in 2009. To learn more about this NASA spinoff, read the original article from Spinoff 2010: http://www.sti.nasa.gov/tto/Spinoff2010/ps_5.html
› Back To Top