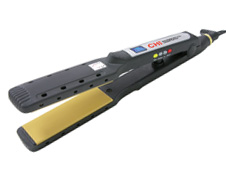 The CHI line of hairstyling irons features a unique ceramic composite, which releases ions that are beneficial for hair and make it softer, smoother, and easier to style.
›  Link to larger photo 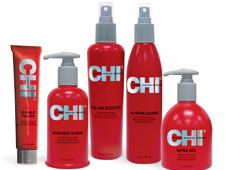 These liquid formulations were specially designed to work with the combination of ions and infrared wavelengths created by Farouk Systems’ CHI styling tools.
›  Link to larger photo Nanomaterials developed by NASA play a big role in professional hairstyling tools.

Disinfecting can be dirty work. Typical cleaning agents, like chlorine and alcohol, release fumes that don’t go away when applied in the contained environment of a spacecraft. So NASA scientists developed an alternative method to keep surfaces disinfected, using a material whose antimicrobial properties have long been known: nanosilver.

Nanosilver acts as a passive sterilizing component, creating an area that is in effect self-cleaning; airborne contaminants like fungi and bacteria quickly die after settling on the surface.

Inspired by NASA, Houston-based Farouk Systems Inc. decided in 2004 to incorporate nanosilver into its line of hairstyling irons and nail polish. The chemical-free sterilization it provides is especially attractive to salons and spas, where an emphasis is placed on reducing fumes and contamination.

This wasn’t the first time Farouk Systems looked to NASA for inspiration. An unlikely connection from years before supplied the company with unique NASA technology that makes it a great example of just how diverse the applications of space technology can be for life on Earth.

From Cancer-fighting Drugs to Hair Conditioners

NASA-derived improvements to hairstyling products began with decades of research on nanomaterials—or materials 10,000 times smaller than the width of a human hair. Dennis Morrison, a former NASA scientist, spent much of his career with the Agency developing ceramic microcapsules that could be filled with cancer-fighting drugs and then injected into solid tumors deep within the body.

In order to release the contents of the microcapsules on demand, Morrison constructed them using special ceramic nanoparticles. When placed in a magnetic field, the material produced ions and heated to a predictable temperature. This caused the ceramic particles to melt holes in the microcapsules, which released the drugs.

Originally, these liquid-filled microballoons were made in low Earth orbit where the absence of gravity aided in the formation of the outer membrane. NASA’s space-based experiments eventually resulted in the development of a device that could make the drug-filled microcapsules on Earth.

“I never had any idea that it might be beneficial to someone in the hair industry making a hair iron with ceramic plates,” says Morrison. But that potential became apparent after talks with Farouk Systems Inc. at a nanotechnology conference.

The company has also developed a second level of hair conditioning and protecting products engineered to complement its unique styling tools. These products are specially formulated to work with the combination of ions and infrared wavelengths caused by the CHI irons and hair dryers.

Morrison may have had no idea that his research in ceramic nanomaterials would lead to breakthroughs in professional hairstyling, but he knows the value of looking for such applications as a natural extension of scientific research.

“Alternate uses may not be envisioned for a certain technology, but once you understand the mechanisms of the technology, you can look for spinoff applications,” he explains.

“As a NASA employee, I was encouraged to spread information about the concepts and results of our research, as well as talk to people about potential new applications of what we were discovering.”

CHI® is a registered trademark of Farouk Systems Inc.