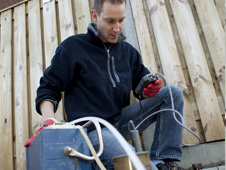 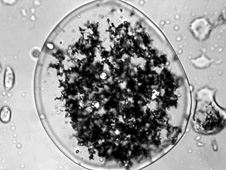 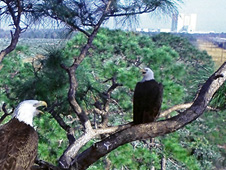 The Merritt Island National Wildlife Refuge, which shares a boundary with Kennedy Space Center, is home to diverse habitats and endangered animals, including the bald eagles pictured above. It is important for Kennedy to dechlorinate dense non-aqueous phase liquid sources in polluted water to protect these animals and area habitats.
›  Link to larger photo

Kennedy Space Center’s launch complexes have seen a lot. They have been the starting point for every manned NASA mission, from Mercury to Gemini, through Apollo, and are now seeing the space shuttle through its final launches. As part of the Merritt Island Wildlife Refuge, Kennedy is also home to over 1,500 different plant and animal species.

To help protect nature and wildlife, NASA works to keep the area as pristine as possible. Sometimes, that involves inventing new and innovative methods for countering pollution.

EZVI neutralizes the toxic chemicals using nano- or micro-sized iron particles in an environmentally friendly water and biodegradable oil emulsification. EZVI is injected deep into the soil, where the contaminants diffuse through the emulsion’s oil membrane and are then dechlorinated by the iron-water interior. The only byproduct of this process is non-toxic hydrocarbon, which diffuses into the groundwater.

Once the NASA-University team had EZVI working in the laboratory, it then contracted with GeoSyntec Inc., a small environmental remediation firm in Boca Raton, Florida, through the NASA Small Business Technology Transfer (STTR) program. GeoSyntec worked at LC-34 to evaluate the real-world effectiveness of EZVI. Groundwater testing showed that EZVI effectively removed the DNAPLs.

Since its development, numerous companies have licensed use of this technology from NASA. Several licenses are in the works, but currently six companies are using the NASA-developed EZVI groundwater remediation compound to clean up polluted areas all around the world, making it NASA’s most-licensed technology to date.