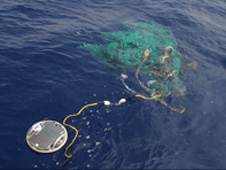 Ghost nets—abandoned or lost fishing nets—are nearly invisible yet devastating to marine ecosystems. A NASA, NOAA, and industry collaboration is using satellites and a system of buoys to locate this debris.
›  Link to larger photo

The seas are the source of many a ghost story. But one ocean specter is far from being just a story and poses a very real threat to ships and marine life.

As much of the Earth is covered in water—liquid, frozen, saltwater, or fresh—much of NASA’s remote sensing work focuses on the oceans and their health. As part of its ocean-observing work, NASA partnered with NOAA and private industry to develop remote sensing technologies for protecting the seas of the North Pacific from a nefarious and pervasive problem: errant fishing nets known as “ghost nets.”

Airborne Technologies Inc. (ATI), of Wasilla, Alaska, is a specialist in airborne marine surveying. When ATI learned of the ghost net problem NASA and NOAA were trying to solve, the company’s proposal was to use satellite and airborne remote sensing to locate the lost and abandoned commercial fishing gear.

Drift netting is a commercial fishing practice using large (between 75 feet to over 30 miles in length) nets weighted at the bottom edge and with buoys floating the top edge. They create a vertical wall of netting in the ocean sometimes several hundred meters deep. Not anchored or attached to a boat, these huge fishing nets are sometimes inadvertently left behind or lost in storms, becoming ghost nets.

While these floating ghost nets prove to be navigation hazards for unsuspecting ships whose propellers can get entangled, they have an even more devastating impact on the environment. Unattended nets damage coral reefs; suffocate marine mammals, sea turtles, and birds when they wash ashore; and, if left afloat, bunch up and then begin a perpetual cycle of mass fish kills—dense balls of nets heavy with trapped fish sink, are cleaned by bottom-dwelling scavengers, and float back to the surface to start the cycle over. Modern synthetic netting can sustain this cycle indefinitely while drifting over a vast range; ghost nets from around the Pacific have washed ashore on beaches as far apart as Alaska and the outer Hawaiian Islands.

NASA and NOAA were jointly exploring ways of improving methods of locating and disposing of ghost nets before they could damage vessels and the environment. Finding the nets in the open ocean before they have the opportunity to cause too much harm was the preferred option, but presented another problem: It was like finding a needle in a haystack.

Veenstra and ATI proposed using satellites to monitor the convergence of currents in order to track the paths the nets were likely to take. After completing the work with NASA, ATI formed a new commercial division, Ocean Trek Research Inc., to expand upon the line of satellite communicating ocean buoys, opening up their use to additional markets.

ATI has already built over 900 buoys, each about the size of a laundry basket. As part of the ghost net remediation project through NOAA, it makes the buoys available to vessels of opportunity, including U.S. Coast Guard and research boats—any craft out on the water in the regions where the nets might be spotted and tagged with a buoy. The tagged nets are then easy to locate and recover for crews to collect them.

It’s not quite Ghostbusters, but thanks to NASA’s partnership with ATI, the problem of ghost nets is a step closer to vanishing entirely.