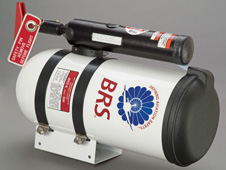 This BRS Aerospace Inc. parachute system, designed for sport aircraft, deploys its chute (contained in the white canister) in less than 1 second, thanks to a solid rocket motor (the black tube on top).
›  Link to larger photo 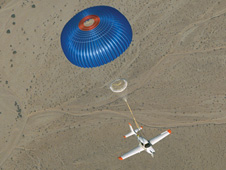 With the help of NASA funding, BRS developed parachutes that have saved hundreds of small aircraft—and their pilots and passengers. Here, a Cirrus SR20’s parachute deploys at over 100 miles per hour, arresting the plane’s descent. BRS parachute systems are standard equipment on Cirrus aircraft.
›  Link to larger photo

With Help From NASA, One Company Has Saved the Lives of Hundreds of Pilots and Passengers

When Boris Popov was 8 years old, he took one of his mother’s sheets and some thread, made a parachute, climbed a tree, and jumped. The homemade chute did little to break Popov’s fall; his father took the disappointed boy aside and said, “Son, you’ve got to start higher.”

Years later in the mid-1970s, recent college graduate Popov was hang gliding over a lake when the boat that was towing him accelerated too quickly, ripping the control bar from his hands. Some 500 feet in the air, Popov’s glider went into a spiral, coming apart as Popov plummeted to the water. As he fell, Popov realized that if he only had some kind of parachute, he could have been saved.

Decades later, the NASA Small Aircraft Transportation System (SATS) project envisioned an on-demand, point-to-point, widely distributed transportation system relying on small aircraft (4-10 passengers) operating out of the Nation’s more than 5,400 public-use landing facilities. With about 98 percent of the population living within 20 miles of at least one such airport, SATS could provide cheaper, faster, and more practical options for business and leisure travel, medical services, and package delivery.

Though the SATS project concluded its research in 2006, the pursuit of a nationwide GA transportation system continues through other initiatives. Technological advances are still necessary, however, to make such a system viable, such as improving the safety of small aircraft. One solution has come in the form of an invention developed by Popov, who having survived his fall, began investigating methods of ballistically deploying parachutes for aircraft in emergency situations. Today, with the help of a NASA partnership, the parachute that Popov wished for when plunging to Earth is saving hundreds of small aircraft pilots from a similar fate.

Safety in Less Than One Second

Popov founded now BRS Aerospace in 1980. He formed the Saint Paul, Minnesota, company to commercialize his solution to personal aircraft accidents like the one he experienced: a whole aircraft parachute recovery system. NASA funding helped BRS with the development of the technology now part of many of the world’s most popular small aircraft.

The BRS parachute system is deployed by a solid rocket motor activated when the pilot pulls on the cockpit handle release. The rocket fires at over 100 miles per hour and extracts the parachute in less than 1 second. The parachute arrests the descent of the entire aircraft and deposits the vehicle and its occupants on the ground. Not only are lives saved, but in many incidents, expensive aircraft are preserved to fly again.

BRS has sold more than 30,000 systems worldwide since its founding. Popov welcomes the role NASA has played in helping turn the promise he made to himself that day at the lake into a reality for the people whose lives have been saved by the BRS parachute so far.

“BRS is a classic example of taxpayers’ money being spent on research that has translated into 265 lives saved,” he says. “That’s a justifiable and profound benefit.”

To learn more about this NASA spinoff, read the original articles from Spinoff 2010: http://www.sti.nasa.gov/tto/Spinoff2010/ps_3.html
› Back To Top