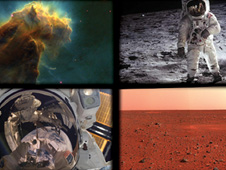 Images like these of (clockwise from top left) the Eagle Nebula, Apollo 11 astronaut Buzz Aldrin on the Moon, the Martian landscape, and an astronaut self-portrait taken during a spacewalk bring the wonders of space exploration down to Earth.
›  Link to larger photo 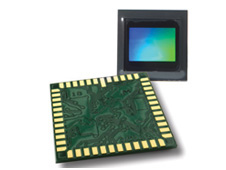 Aptina Imaging Corporation’s 10-megapixel complementary metal-oxide semiconductor sensor is the first such device for point-and-shoot cameras.
›  Link to larger photo
A NASA inventor developed the technology that now enables cell phone cameras and other imaging devices around the world.

Buzz Aldrin standing on the stark surface of the Moon. The towering gas pillars of the Eagle Nebula. The rocky, rust-colored expanses of Mars.

Among NASA’s successes in space exploration have been the indelible images the Agency’s efforts have returned to Earth. Less known than Hubble’s galactic vistas or the Mars rovers’ panoramic landscapes is the impact NASA has had on the era of digital photography on Earth.

While the first digital camera was built by Eastman Kodak in 1975, the first to actually develop the concept of the digital camera was Jet Propulsion Laboratory (JPL) engineer Eugene Lally, who in the 1960s described the use of mosaic photosensors to digitize light signals and produce still images.

In the 1990s, a JPL team led by Eric Fossum researched ways of improving complementary metal-oxide semiconductor (CMOS) image sensors in order to significantly miniaturize cameras on interplanetary spacecraft yet maintain scientific image quality. Fossum invented the CMOS active-pixel sensor (CMOS-APS), which featured improved image quality and provided for complete miniature imaging systems that operate quickly with low power demands. Fossum realized the CMOS-APS technology would be useful not only for imaging in space but on Earth as well.

In 1995, he and his colleagues founded Photobit, based in Pasadena, California. Photobit exclusively licensed the CMOS-APS technology from JPL, becoming the first company to commercialize CMOS image sensors.

“We saw an expanding number of applications for these miniaturized cameras,” says Roger Panicacci, one of Photobit’s founders. The company quickly positioned itself on the cutting edge of the field of CMOS imaging, and by June 2000, it had shipped 1 million sensors for use in popular Web cameras, dental radiography, and automotive applications. With the exploding popularity of the camera phone in the mid-2000s, the CMOS-APS proved ideal for crafting cameras that fit into slim cell phones and produce good photos without draining batteries. Riding the wave of camera phone demand, in 2006 the group became the world’s leading supplier of CMOS image sensors. In 2008, it shipped its 1 billionth sensor. The technology and its inventors have been inducted into the Space Technology Hall of Fame, and Fossum was inducted into the National Inventors Hall of Fame in 2011.

Now known as Aptina Imaging Corporation, based in San Jose, California, the company has grown from its NASA roots into a leader of the CMOS image sensor industry. Its sensors are currently integrated into one of every three cell phone cameras and are part of every major brand personal computer camera worldwide, as well as many embedded cameras for notebook computers. The company’s sensors also offer high definition photo and video capabilities for camera phones and digital cameras.

Aptina’s spinoff technology can also be found in other, less obvious applications. The company produces tiny sensors for use in medical endoscopes and even pill-size cameras that can be swallowed. Major international auto brands employ Aptina designs for applications like backup cameras that help with parking and ensure safe reverse motion.

While Photobit once saw 1 million sensors shipped as a major milestone, says Panicacci, Aptina often ships over 1 million sensors a day. As demand rises for high-end capabilities like high-definition imaging and the market for camera products booms, Aptina’s NASA-developed technology should play an even greater role in products benefiting the public every day.