Grow Text SizeShrink Text Size
A Whale of an Innovation 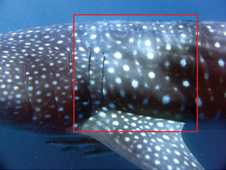 The Javanese name for the whale shark, “geger lintang,” means “stars in the back.” The Groth algorithm, originally designed to help map stars imaged by the Hubble Space Telescope, was adapted to match spot patterns on skin of the rare fish.
›  Link to larger photo 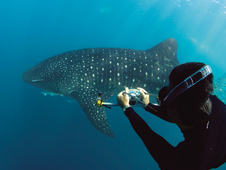 Divers can log their whale shark images on the ECOCEAN Whale Shark Photo-identification Library, where the images are analyzed by the adapted Groth algorithm and help contribute to a better understanding of the sharks’ population and habits.
›  Link to larger photo 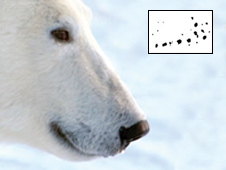 The speckle-skinned whale shark, despite growing to lengths of up to 40 feet, is among the rarest and least understood fish species. Its name in Madagascar—“marokintana”—means “many stars.” It’s fitting, then, that researchers are now tracking these filter-feeding leviathans using an innovation originally designed to help NASA map the heavens.

In 2002, Portland, Oregon, software programmer Jason Holmberg had a rare encounter with a whale shark while scuba diving in the Red Sea. Fascinated, Holmberg began toying with ideas to help improve methods for tracking the unusual fish. With the help of Goddard Space Flight Center astrophysicist Zaven Arzoumanian, he soon discovered a solution—the Groth algorithm.

In 1986, Princeton University physics professor Edward J. Groth, supported by the Hubble Space Telescope program, invented a pattern-matching algorithm that addressed the challenge of mapping the intimidating star fields Hubble would uncover following its launch in 1990.

(To understand the magnitude of the task, type a lower-case letter “o” in Times New Roman, 10-point font. Now print the paper with the “o” and hold it at arm’s length. Viewed from this distance, the area inside the “o” is approximately equal to the area observed in the Hubble Ultra Deep Field, an image taken by the Hubble Space Telescope. Within that space, Hubble revealed approximately 10,000 galaxies, each containing billions of stars.)

While the spots on a whale shark’s back are at most in the dozens, the distinctive markings identify individual sharks like a fingerprint. Working with marine biologist Brad Norman of the Australia-based nonprofit ECOCEAN, Holmberg found that tracking whale sharks by examining and comparing photos of the sharks by eye was exceedingly tedious. To improve the process, Holmberg and Arzoumanian modified the Groth algorithm for matching the spot patterns on whale sharks’ skins.

Now the adapted algorithm helps the ECOCEAN Whale Shark Photo-Identification Library provide to essential life history and migration data on the giant fish. Everyone from professional researchers to amateur SCUBA divers contribute photos to the database, which are then sorted and matched using the NASA-derived algorithm.

“We’re talking about an animal considered to be rare, maybe a couple of hundred documented sightings in all of history,” says Holmberg. Now the library contains more than 13,000 sighting reports and 32,000 photos.

In theory, the algorithm can be applied to track any animal with unique spotting that does not change as it ages. While polar bears lack of obvious spots, the algorithm has been adapted to track the animal’s North American populations as well—using the unique whisker markings on their muzzles. Ecotourists in Canada have helped researchers from the University of Central Florida gather photos of the bears for the tracking process, contributing as citizen scientists, much like Holmberg has.

In this way, NASA’s efforts to learn more about the stars have ended up with scientists learning more about animals on Earth.

“There’s a groundswell of data we’re getting,” says Holmberg, “and it all goes back to the algorithm Edward Groth wrote years ago.”

To learn more about this NASA spinoff, read the original article from Spinoff 2009: http://www.sti.nasa.gov/tto/Spinoff2009/er_1.html
› Back To Top