Lightening the Load of Recovery 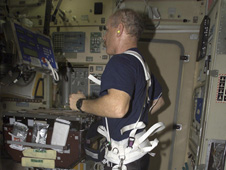 In space, in order to prevent bone loss and muscle atrophy, astronauts exercise on treadmills equipped with a loading harness.
›  Link to larger photo 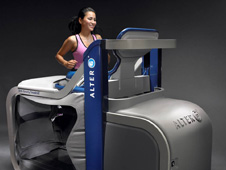 Derived from technology developed at Ames Research Center, the AlterG “anti-gravity” treadmill requires only the touch of a button to increase the air pressure around the lower body, lifting, reducing strain, and minimizing impact on the legs—allowing the patient to exercise and strengthen injured or weakened limbs.
›  Link to larger photo A unique treadmill—invented by a NASA scientist—supports people trying to get back on their feet

Ask the Denver attorney who whose legs were smashed in a car accident. Ask the veterans rehabilitating from injuries sustained while defending the Nation. Ask NBA star Blake Griffin, or NFL safety Jim Leonhard, both who endured leg injuries playing their sports. Ask U.S. soccer pro Charlie Davies, who returned to the field only a month after suffering life-threatening trauma in a car crash.

All will tell you about the benefits of NASA-derived technology.

Each of these people were aided in their recovery by an innovation that emerged from NASA research and now provides a lift to people around the world who suffer from mobility issues.

Developed for Astronauts, Adapted for Earth

In order to prevent bone loss and muscle atrophy, astronauts exercise on treadmills equipped with a loading harness. However, the treadmill loading harness is uncomfortable and prevents astronauts from exercising normally and with the same intensity as on Earth. While he was studying the biomechanics of exercise, Ames Research Center scientist Robert Whalen suggested using air pressure as an effective way of applying a high force, equal to body weight, to astronauts during treadmill exercise to replace the harness system.

After patenting his gravity differential technology in 1992, Whalen licensed his patent in 2005 to a private company called AlterG to help rehabilitate patients needing support as they learned (or re-learned) to stand, walk, and run. The Menlo Park, California company adapted the technology for athletic and medical uses here on Earth in the form of a specialized, “anti-gravity” treadmill. This rehabilitation device applies air pressure to a patient’s lower body in order to unload up to 80 percent of a patient’s weight, which reduces the stress placed on the body during rehabilitation.

A variety of patients—whether suffering from brain injury, neurological disorders, athletic injuries, or other stresses on the joints such as arthritis or morbid obesity—now use the NASA-derived technology in physical therapy. Professional and college sports teams across the United States feature the AlterG treadmill in their training facilities. Injured soldiers walk and run with the technology’s assistance at military hospitals and rehabilitation centers. Seniors get essential exercise using the support the machine provides, as do people with bariatric weight issues who cannot normally support their own weight. The treadmill has been a proven option for neurological uses as well, including helping patients re-learn proper balance and gait and transition to independent movement after traumatic brain injury.

The success of AlterG’s NASA-derived technology has allowed the company to add 65 employees, and the anti-gravity treadmill is now used around the world.

“We have been able to have players that are recovering from injuries start to run at least a week and sometimes up to a month before they would have been able to normally,” says Bill Tillson, head athletic trainer for Italian soccer club AC Milan.

Ask U.S. soccer star Oguchi Oneywu, who recovered from a knee injury with the help of the AlterG treadmill. Ask podiatric surgeon Arnol Saxena, who believes the technology “will become the standard in rehabilitation and training.” Ask the bariatric patient in Colorado who, using the treadmill, was able to walk—for the first time in over a year.

They will likely agree: Innovation for space has a place here on Earth.

To learn more about this NASA spinoff, read the original article from Spinoff 2009.
Find this article at:http://www.nasa.gov/offices/oct/home/tech_life_alterg.html