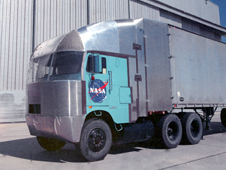 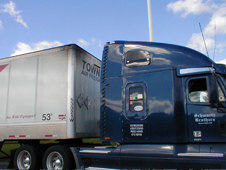 Airtabs, seen here attached to the back of a cab, create controlled air flows to bridge the gap between tractor and trailer and guide air past the rear of the vehicle.
›  Link to larger photo

Today, virtually all tractor-trailer big rigs and recreational vehicles on the highway show the influence of a very different mode of transportation—the space shuttle. And it all came about thanks to a bike ride.

A NASA engineer who rode his bike to work at Dryden Flight Research Center noticed the push and pull of air generated by large trucks on the highway. As a tractor trailer overtook him, he first felt the bow wave of air pushing him toward the sagebrush on the side of the road, followed by the opposite effect in the truck’s wake, drawing him back in.

The engineer mused about ways to mitigate the bow wave and trailing partial vacuum. He resolved to help trucks glide through air instead of push through it. As a result, trucks would benefit from decreased drag and increased fuel efficiency.

NASA colleagues at Dryden were already working on the effects of drag and wind resistance on different kinds of aircraft and the early space shuttle designs, so it was relatively easy to transfer their considerable knowledge to the design of large trucks.

The first formal experiment involved a Ford van retired from delivery duties at Dryden. Mechanics attached an external frame covered with sheet aluminum to give the van flat sides all around and 90-degree angles at all corners. Essentially, it became an aluminum shoebox on wheels.

After measuring the vehicle’s baseline drag, the Dryden engineers slowly set about modifying the shape of the van. Rounding the corners, edges, and ends of the van resulted in a 52-percent reduction in drag, with an estimated 25-percent gain in fuel efficiency at highway speeds. Encouraged by the results, Dryden researchers conducted numerous tests over the following decade to determine which adjustments in the shape of trucks reduced drag and improved efficiency the most.

These simple adjustments, now widespread in truck design, are able to save an estimated 6,829 gallons of gas over the course of an average year of truck driving.

Modified cab designs weren’t the only benefit of NASA’s research project. Engineers found that adding small tabs to the back of trucks forced passing air into a vortex that smoothed the air flow around the vehicle. This was especially useful for the gap between the cab and trailer, which had previously been a major cause of drag that proved difficult to reduce.

Aeroserve Technologies Ltd., of Ottawa, Canada, through its marketing arm, Airtab LLC in Loveland, Colorado, used this technology to create its Airtab vortex generator. Aeroserve’s Airtabs condense NASA’s innovations into an easy-to-handle device that anyone can attach to their vehicle.

Airtabs have been shown to be effective on any vehicle with more than a 30-degree slope to the rear; the potential benefits stretch across a considerable number of vehicles.

As more NASA research is adapted and introduced to the market by companies like Aeroserve, the vehicles populating our highways and interstates will likewise continue to evolve. Practical solutions to aerodynamic challenges, exemplified by the Airtab, offer increased stability, safety, and economy to airborne and surface vehicles alike—contributing tangible benefits to transport and travel nationwide. Airtab® is a registered trademark of Aeroserve Technologies Ltd.

To learn more about this NASA spinoff, read the original article from Spinoff 2008.
Find this article at:http://www.nasa.gov/offices/oct/home/tech_life_aeroserve.html