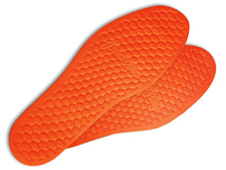 Polar Wrap LLC encapsulates the NASA-derived aerogel and uses it in a product called Toasty Feet. These insoles protect people’s feet from both heat and cold.
›  Link to larger photo 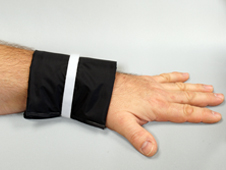 Wrist and ankle wraps are made by Originals By Weber to help people with Raynaud’s disease fight painfully cold hands, fingers, feet, and toes. Ultra-thin aerogel insulation assists in controlling and maintaining blood temperature, and also increases blood flow to the hands and feet.
›  Link to larger photo A super-material finds its home on rockets and in your shoes.

It’s as light as air and feels like styrofoam to the touch. But drop it on a table and you’ll hear a ping and acoustic resonance like crystal glass. Put an ice cube on top of it, place it over an intense flame, and the ice won’t melt.

Discovered nearly 80 years ago, aerogel is an open-celled material comprised of more than 95 percent air. Similar in chemical structure to glass, aerogels have gas or air in their pores instead of liquid. With individual pores only a few nanometers wide, it has the lowest thermal conductivity of any known solid.

Aerogel’s remarkable characteristics attracted NASA for cryogenic insulation applications—for example, keeping rocket fuel hundreds of degrees below zero. The problem, however, was that aerogel was too fragile to handle in its solid form and was too expensive to manufacture.

To make practical aerogel a reality, NASA partnered with Aspen Systems Inc., based in Marlborough, Massachusetts, to create a flexible, durable, easy-to-use prototype of the substance. The result was an aerogel disc roughly the size of a cookie, with insulating abilities so effective that lab tests couldn’t fully characterize its features.

Through continuing partnerships with NASA, Aspen Systems developed a manufacturing process that cut production time and costs while improving the technology. The result was a practical, new form of aerogel: a flexible aerogel blanket.

Comfort on Mount Everest or in Death Valley

While NASA uses Aspen’s aerogel for cryogenic applications, there is a dizzying array of industrial applications for the product, including insulation for piping, building and construction, appliances and refrigeration equipment, and trucks and automobiles.

There is also a healthy market for aerogel in consumer applications. Polar Wrap LLC is a Memphis, Tennessee, company that buys aerogel from Aspen and then applies its own patented process to create insoles called Toasty Feet. Designed to fit in the bottom of a boot or shoe, Toasty Feet resists both heat loss and gain.

The product has been wildly successful: the company recently sold 1.5 million pairs in a single year to professional and amateur athletes, ice fishermen, hunters, U.S. military and law enforcement officers, researchers at the South Pole, mountain climbers, hikers, bikers, motorcyclists, and many others.

Not everyone in need of aerogel’s insulation, however, are in such extreme environments. Terrance Weber, owner of Originals By Weber, of Toms River, New Jersey, wanted a way to help people with Raynaud’s disease, a condition that causes fingers and toes to go numb or get painfully cold.

In those affected by the disease, arteries in the wrists and ankles respond to cold temperatures or stress by constricting, which limits blood circulation. Using wraps lined with aerogel—so thin and lightweight, according to Weber, that you “almost don’t even know it’s there”—consumers are better able to maintain temperatures and keep the blood flowing into their fingers and toes.

Although the insulating properties of aerogel have been known for almost a century, it took the innovation of a NASA partnership to liberate the technology for everyday use, whether your “everyday” means keeping rocket fuel chilled, summiting Mount Everest, or perhaps something a little less extreme.