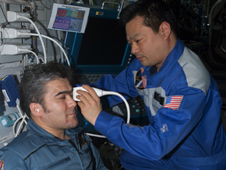 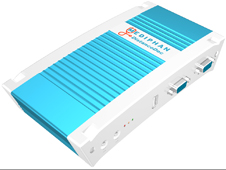 By capturing, transmitting, and storing diagnostic-quality ultrasound imagery and video, the devices allow doctors to diagnose injuries and other conditions while not in the same room, building, or even hemisphere as their patients. Image Credit: Mediphan
›  Link to larger photo 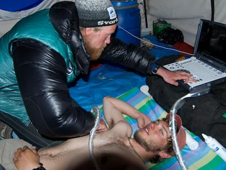 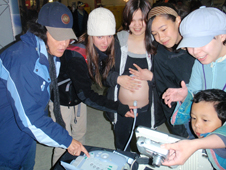 The techniques established by the Advanced Diagnostic Ultrasound in Microgravity (ADUM) research on the ISS can rapidly and economically improve medical care in underserved areas. This photo shows an obstetrical examination conducted on an Inuit mother in the high arctic circle. Image Credit: Scott A. Dulchavsky, M.D., Ph.D.
›  Link to larger photo

Dr. Scott Dulchavsky once diagnosed high-altitude pulmonary edema in a mountain climber over 20,000 feet up the slope of Mount Everest. Dulchavsky made the diagnosis from his office in Detroit, half a world away. The story behind this long-distance medical achievement begins with a seemingly unrelated fact: There is no X-ray machine on the International Space Station (ISS).

On the ISS, diagnosing an injury or other medical issue can be problematic; bulky medical imaging devices are too large and heavy for costly transportation into space, and the nearest doctors and fully equipped hospitals are miles away on Earth.

The ISS does have an ultrasound machine, for experiments on the effects of microgravity on human health. On Earth, ultrasound is commonly used for imaging fetus development, abdominal conditions like gallstones, and blood flow in patients with arterial disease. That changed in 2000, when NASA approached Dulchavsky, chair of the Department of Surgery at Henry Ford Hospital in Detroit, to make ultrasound a more versatile diagnostic technique and to adapt it for remote use on the ISS. He became lead investigator for the Advanced Diagnostic Ultrasound in Microgravity (ADUM) experiment, a collaborative effort between Johnson Space Center, Henry Ford Hospital, and Wyle Laboratories Inc. in Houston.

As part of the ADUM experiment, ISS crewmembers with only minimal ultrasound training used non-traditional ultrasound techniques pioneered by Dulchavsky’s team for imaging of a wide range of body parts. These novel ultrasound techniques can evaluate infections in the teeth or sinus cavities or judge the effects of space flight on the central nervous system by measuring changes in the diameter of the eye’s optic nerve sheath as a gauge of pressure around the brain.

In keeping with NASA’s mandate to transfer space technologies for terrestrial use, the ADUM team worked to bring the remote ultrasound procedures down to Earth. But there was a major obstacle: There were no cost-effective, technologically viable methods for sending ultrasound scans over long distances without a loss of image quality.

To overcome this problem, they collaborated with Epiphan Systems Inc., headquartered in Canada with operations in Springfield, New Jersey. The cooperation resulted in the formation of Mediphan, a remote medical diagnostics technology company. Mediphan drew on NASA expertise to adapt Epiphan’s video-streaming innovations into a practical solution.

Now, Mediphan’s DistanceDoc device captures stills or video from the ultrasound monitor and allows the ultrasound operator to transmit the images securely over the Internet in real time and at near-original resolution.

So far, more than 425 musculoskeletal ultrasound examinations have been performed on Olympians and professional athletes, a number of these with remote guidance, and more than 500 athlete evaluations have been conducted at U.S. Olympic training facilities. Meanwhile, the NASA-derived innovations are providing remote evaluations to monitor pregnancies and diagnose injuries among the Inuit population of the Arctic Circle.

“We can utilize the techniques and technologies that we developed for use on the ISS to diagnose a wide variety of medical issues, such as traumatic injury, problematic pregnancies, and certain infectious diseases,” says Dulchavsky. The doctor has even worked at a distance with a NASA team in the Mars-like environment of Devon Island in northern Canada, performing the first-ever remote guidance of a simulated appendectomy.

One day, the same technique may be used to do the real thing in a village in Madagascar, on the slope of Everest, or on Mars itself.