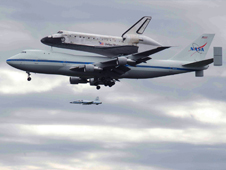 Space shuttle Discovery, mounted atop a NASA 747 Shuttle Carrier Aircraft (SCA)
Image courtesy of James M. Fry
› Link to larger photo
The Space Shuttle Discovery has made its final voyage and now rests in the Smithsonian’s Air and Space Museum Steven F. Udvar-Hazy Center just outside of Washington, D.C. Its transfer has inspired many to reflect on the historic contributions of the Space Shuttle Program to human space flight and scientific discovery.

But even while the Space Shuttle Program has officially come to a close, more than 120 technologies developed during its lifetime are continuing to benefit society as commercial products. As a part of its celebration of the retirement of the space shuttle, NASA highlighted several of these spinoffs with an exhibit on display at the unveiling of Discovery at its new permanent home. The exhibit will also appear at the upcoming unveilings of the Space Shuttles Enterprise, Endeavour, and Atlantis in New York City, Los Angeles, and Kennedy Space Center, respectively.

Among the award-winning spinoffs that have emerged from the Space Shuttle Program are life-saving medical innovations, energy-conserving insulation and design elements, and even protective—and fashionable—eyewear.

Space shuttle science has led to important, and even surprising, advances in medical technology. Inspired by experiments demonstrating the strong growth of bacteria in microgravity, NASA engineers developed a special bioreactor with rotating walls to simulate freefall conditions—essentially recreating a microgravity environment on Earth. The unique growth method encourages healthier, more natural-forming cell cultures and is currently facilitating research into treatment for cancer and diabetes.

A heart pump on display in the NASA exhibit is a great example of how innovation can come from unexpected sources—in this case flow challenges posed by the space shuttle’s fuel pumps, a problem that turned out to share similarities with challenges posed by human blood circulation. The resulting miniaturized pump, which was a result of collaboration between doctors and NASA engineers, has kept more than 450 people alive while they wait for a transplant.

One of the shuttle’s most versatile spinoffs is the flexible, practical form of aerogel developed by NASA to keep liquid hydrogen fuel for the shuttle below -253 °C. Aerogel, the world’s lightest solid and one of the most effective insulators, now protects homes and industrial equipment, keeps the feet of mountain climbers warm, and is used to treat painful circulatory disorders.

Another set of space shuttle spinoffs are not only featured in the NASA traveling display but employed on the road across the Nation. Aerodynamics research conducted as part of the Space Shuttle Program led to truck design improvements, now ubiquitous, that can save thousands of gallons of gas per vehicle each year. NASA engineers also discovered that adding small tabs to the back of a truck smoothed air flow around the vehicle, reducing drag—a technology made commercially available.

Multiple NASA-derived advances in eyewear have proven to be popular spinoff technologies over the years. One such technology, a titanium frame for glasses that is light-weight and hinge- and screw-free, is now widely available for consumers in both corrective and sunglass models. These frames, and unique protective lenses, are derived from designs originally created for astronauts.

Through these technologies and many more, the Space Shuttle Program will benefit the Nation for years to come, forecasting the kind of unique returns we can expect from current and future NASA programs and missions. These are only a fraction of the nearly 1,800 spinoffs documented to date—technologies that have saved tens of thousands of lives, created thousands of jobs, reduced billions of dollars in costs, and generated over a billion dollars in revenue.

For more information on NASA spinoff technologies from the Space Shuttle Program and beyond, visit http://spinoff.nasa.gov.
› Back To Top