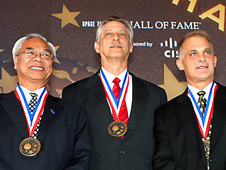 During a ceremony at the Space Foundation National Space Symposium in Colorado Springs Thursday, the Space Technology Hall of Fame inducted a rotating device developed by NASA inventors to grow specimens of living tissues. Developed in 1986 by a group of NASA engineers and researchers at Johnson Space Center in Houston, the device, known as the bioreactor, enables the growth of tissue, cancer tumors and virus cultures outside the body in space and on Earth.

The Space Technology Hall of Fame is a collaboration between NASA and the Space Foundation. Organizational inductees for the bioreactor in 2011 are those that developed the technology and refined it for commercial use: NASA¹s Johnson Space Center, Regenetech Inc. and Synthecon Inc. All three are based in Houston, Texas.
› Back To Top