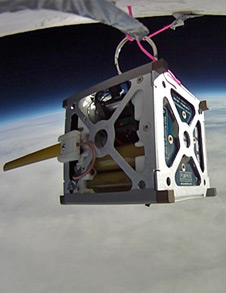 The fast-paced proliferation and popularity of mobile devices here on Earth, like smartphones loaded with powerful operating systems, will find a new niche market– this time in space, thanks to NASA’s trailblazing PhoneSat project.

To be rocketed into space early next year, PhoneSat is set to showcase use of lower cost, off-the-store-shelf, commercially available technology that enables space commerce, educational activities and citizen-exploration.

“PhoneSat demonstrates a philosophy of taking a creative idea, then building and testing that inspiration in a very rapid way…as opposed to long planning processes typical of larger spacecraft programs,” said Andrew Petro, NASA program executive for Small Spacecraft Technology within the Space Technology Program at NASA Headquarters in Washington.
Petro said PhoneSat is an out of the box activity, one novel pathway being explored for small-sized satellites that, quite literally, “chip away” at lowering the cost of constructing future spacecraft.
PhoneSat takes advantage of commercial products already imbued with speedy computing chips, lots of memory and ultra-tiny sensors like high-resolution cameras and navigation devices.
That’s a mix of attributes akin to what spacecraft require, Petro said. “Those are already built into a smart phone and that’s what we’re taking advantage of in the PhoneSat Project, which could ultimately lead to very low-cost satellite designs.”

“From the programmatic level, we’re exploring the use of non-traditional hardware and systems providers…outside of what you normally call the aerospace industries,” said Bruce Yost, manager of the Small Spacecraft Technology program at the NASA Ames Research Center at Moffett Field, Calif., home to a tight-knit team of engineers that conceived of and developed PhoneSat.

“PhoneSat is a way to find other ways to do some of our space missions in a non-traditional manner,” Yost said. 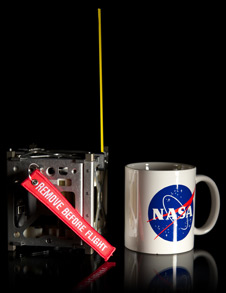 Size of a NASA coffee cup! A trio of CubeSats makes up the innovative PhoneSat Project to be launched next year.
Credit: NASA Ames Research Center

There are three prototype satellites built for launch in the PhoneSat Project, each a “nanosatellite” that is a 4-inch cube and weighs just three pounds. The three PhoneSats are dubbed Alexander, Graham, and Bell.

PhoneSat 1.0 makes use of Nexus One smartphone technology made by HTC Corporation and Google’s Android operating system.

A beta version of PhoneSat 2.0 joins the two battery-powered PhoneSat 1.0 spacecraft. PhoneSat 2.0 is built around an updated Nexus S smartphone made by Samsung Electronics which runs Google’s Android operating system to provide a faster core processor, avionics and gyroscopes.

PhoneSat 2.0 has solar panels to enable longer-duration missions and a GPS receiver. It also has magnetorquer coils—electro-magnets that interact with Earth’s magnetic field—as well as reaction wheels to actively control the satellite’s orientation in space.

“We’re providing a set of 3 satellites, inserted into a spring-loaded dispenser attached to the launch vehicle. They’re stacked in there like a toaster,” said Jim Cockrell, PhoneSat 1.0 project manager at NASA Ames.

A creative and cost-saving approach in fabricating the solar paneled PhoneSat 2.0 is the use of Triangular Advanced Solar Cells, or TASC. Purchased from Spectrolab of Sylmar, Calif. at a modest price, the solar cells are “leftovers” from the manufacturing process of larger solar cells.

Cockrell said the cells are very small so it took more of them to cover the given surface area available on the PhoneSat. The cells offer high efficiency (27 percent) and, as they are a byproduct of the fabrication of larger cells, they are sold very cheaply—about $250 for a quantity of 100, he noted.

Yet another cost-cutting avenue taken was the PhoneSat project’s use of economical, commercial off-the-shelf (COTS) brushless DC motors.

Cockrell said that the mass of the motors armatures provide all the momentum needed. “No external flywheel is attached, and they have built-in speed controllers,” he said, “so the mechanical and electrical designs have minimum moving parts and are simple.”

Popular Science magazine has chosen the NASA Ames Research Center’s PhoneSat project as one of the winners in the Aerospace category for their “Best of What's New 2012” awards. PhoneSat is a demonstration project to build, launch and fly one of the lowest-cost, easiest-to-build satellites in space.

“The PhoneSat project is kind of a technology demonstration effort,” said Jasper Wolfe, technical lead for attitude determination and control of the launch vehicle for the PhoneSat Project at NASA Ames.

During the PhoneSat Project’s time in orbit, a global amateur radio community will be engaged, able to download and upload packets of data. Wolfe is anxious to see how they creatively utilize the Earth orbiting PhoneSats.

“Personally, one of the other benefits from PhoneSat is inspirational…demonstrating cool, cheap technologies that can inspire a lot of people to get involved in space,” Wolfe said. “We want to keep up with all the technologies that are coming out and continually find new applications for technologies from other industries, particularly low-cost industries.”
NASA’s Petro said the PhoneSat Project is a forerunner of things to come that can decrease the costs of future small spacecraft.

“It really is a revolution…and it’s happening,” Petro said. “My goal is to get in front of this wave and not be carried along by it…and see where NASA can make a contribution to the field.”