Robots can assist in human missions by arriving and performing tasks before humans arrive, by working alongside astronauts during crewed missions, and by staying behind to perform additional tasks after the crew leaves. HRS's goal is to improve or invent technologies that span these three mission phases, typically working to bridge the gap between low technology levels and mission-ready products. 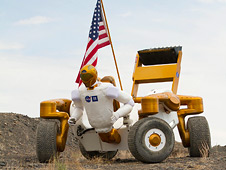 Before crew arrives or after they depart, people typically supervise the robots by remote control from far away. For crewed missions, astronauts will work side-by-side with the robots, ride on them, or even work and live inside them in the case of pressurized robotic rovers and exploration vehicles.

HRS works with an active community of universities, industry, and other government agencies, developing new ideas, conducting demonstrations, and maturing technologies for use in space and on Earth. This community is expanding into secondary education, with dozens of programs and competitions, and thousands of future engineers working in schools with technology that a decade ago was limited to graduate studies. The HRS project will tap into this community with educational and participatory opportunities for the public that include grants, internships and other sponsored activities.

Past products developed by HRS:
As a foundation project, HRS is connected to missions within the Office of Chief Technologist (OCT) and other activities as directed by the OCT-Game Changing Development (GCD) Program.