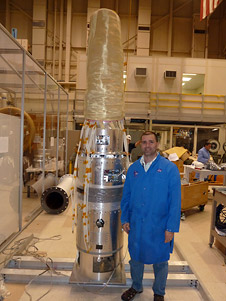 Where are you from?

Born in Houston, Texas (there until two years old).
Grew up in Nashville with brief stints in New Orleans, Louisiana, and Conroe, Texas (through the age of 17).
College in Auburn, Ala., through age 22.
Hired by NASA Langley straight out of college and spent the last 23 years here in Va. Tidewater region.


What motivated you to work for NASA?

Watching TV of men walking on the moon.


What is your role on HIAD, and what are your responsibilities?

Chief Engineer. Make sure that all of the efforts of the project are achievable and direct the technical development to assure in the end we have a component that can be integrated into a flight mission.


Tell us about a favorite moment so far in your career.

Working with astronauts developing hardware, and being in the customer support room at Mission Control while the astronauts were deploying and retrieving the hardware I designed.


What advice would you give to someone who wants to take the same career path as you?

Work hard. Never give up even when it doesn't look like there's any chance that you'll get to do what you want. Go after whatever tasks excite you, but still give your best on jobs that you may be saddled with along the way even though they are not what you hoped for. Always take the opportunity to learn from whatever you're doing.


What do you do for fun?

Engineering (Yes I know it's sad, but I love it).
Play at the beach with my wife and daughters.
Scuba Dive
Distance Running
Tinker with all things mechanical.


If you were talking to a student interested in science and math or engineering, what advice would you give them?

The work involved in getting an engineering degree is significant. It required sacrifices on my part, and I had to miss out on some of the "fun" early in life. That doesn't mean I didn't have fun, but I wasn't able to take part in everything everyone else was doing. I had to pick and choose.

In the end it was all worth it. Installing hardware into the shuttle bay, being there to watch a night launch live in front of the countdown clock to see it leave the planet, watching the astronauts crawl along the MIR space station and clamp it in place, operating an atmospheric science instrument at the top of a volcano in Hawaii, being in the control room to watch the IRVE launches and hopefully one day watching the Orbital PCM returning to earth behind a heatshield that was developed because I pushed the idea makes it all worth it. Looking back over the things I accomplished all I can think is "cool."

All of this awaits someone willing to pay the dues up front. Always push to find the limits of what you can do and go after what you want. And hey I was not the brightest guy in any of my classes, so it may come easier to them.