Grow Text SizeShrink Text Size
IRVE-3: Inflatable Heat Shield a Splashing Success
Three years of their hard work plunged in the Atlantic Ocean on a Monday in July and a group of NASA engineers could not have been more thrilled.


The launch and deployment of the third Inflatable Reentry Vehicle Experiment (IRVE-3).

They were part of the Inflatable Reentry Vehicle Experiment (IRVE-3) team that is working to develop an inflatable heat shield. The technology could be used to protect spacecraft when entering a planet's atmosphere or returning here to Earth. 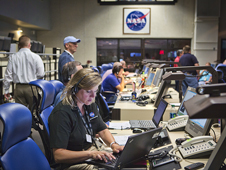 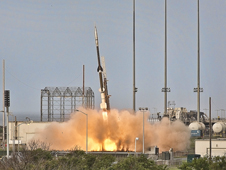 A 64-foot, 22-inch (19.5 meters, 56 centimeters) diameter Black Brant XI sounding rocket launched the IRVE-3, encased in a nose cone, from NASA's Wallops Flight Facility on Virginia's Eastern Shore. The rocket with the inflatable on board shot 288 miles (463.5 kilometers) up and IRVE-3 and its payload were ejected into the atmosphere. The technology demonstrator inflated and fell back to Earth -- cameras and temperature and pressure sensors monitoring its performance all the way down. After a total of 20 minutes -- from launch to splash down -- it landed in the Atlantic about 100 miles (161 kilometers) East of Cape Hatteras, North Carolina.

"Everything went well... like clockwork. The IRVE-3 performed just as it was supposed to," said Neil Cheatwood, IRVE-3 principal investigator at NASA's Langley Research Center in Hampton, Va. "It entered Earth's atmosphere at Mach 10, ten times the speed of sound, and successfully survived the heat and forces of the journey. Temperatures recorded were as much as 1,000 degrees Fahrenheit (538 degrees Celsius) and the IRVE-3 experienced forces up 20 G's."

What makes that particularly remarkable according to engineers is that the IRVE-3 wasn't made of metal or composite materials like most spacecraft heat shields or aeroshells -- it was made of high tech fabric and inflated to create its shape and structure. The IRVE-3 looked like a 10-foot (3 meter) diameter mushroom composed of a seven giant braided Kevlar rings stacked and lashed together -- then covered by a thermal blanket made up of layers of heat resistant materials.

The trip through the atmosphere provided researchers lots of data that will help them design better heat shields in the future. But they will also have the chance to study the IRVE-3 first hand. A high-speed Stiletto boat provided by the U.S. Navy was on stand by to retrieve it. Stiletto is a maritime demonstration craft operated by Naval Surface Warfare Center Carderock, Combatant Craft Division, and is based out of Joint Expeditionary Base (JEB) Little Creek-Ft Story, Va.