The Inflatable Reentry Vehicle Experiment (IRVE-3) is the third in a series of suborbital flight tests of this new technology. It is scheduled to launch from the Wallops Flight Facility on Virginia's Eastern Shore this summer.

Technicians will vacuum pack the uninflated 10-foot (3.05 meters) diameter cone of high-tech inner tubes into a 22-inch (56 centimeters) diameter sounding rocket. During the flight test an on board system will inflate the tubes -- stretching a thermal blanket that covers them -to create an aeroshell or heat shield. That heat shield will protect a payload that consists of four segments including the inflation system, steering mechanisms, telemetry equipment and camera gear.

After launch the rocket will climb 287 miles (462 kilometers) into the skies over the Atlantic Ocean. The IRVE-3 will separate from the sounding rocket, its aeroshell will get pumped full of nitrogen and then the inflated heat shield and payload will plummet back through Earth's atmosphere. Cameras and instruments will transmit pictures and data to researchers in the Wallops control room the entire time. 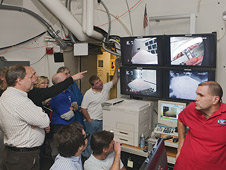 Engineers at NASA's Langley Research Center in Hampton, Va., who are overseeing the project, have spent the last three years preparing for the test. They have studied designs, assessed materials in laboratories and wind tunnels and subjected hardware to thermal and pressure loads beyond what it should face in flight.

"We have to do all kinds of different testing," said flight systems engineer Carrie Rhoades. "We do high temperature tunnel tests in a number of facilities to check out all different types of thermal protection system materials. For IRVE-3 we know what should work, but for future missions we want to go bigger to carry larger payloads, so we've got to keep testing and trying out different materials."

One of the last hurdles before launch was a complete shakedown of the system in NASA Langley's Transonic Dynamics Tunnel, which technicians de-pressurized to mimic upper atmospheric conditions where the aeroshell will be deployed. The team collected data in the control room as they watched the simulated 20-minute flight of IRVE-3. Since a wind tunnel test couldn't replicate the actual flight and separation of the spacecraft from the sounding rocket, the real action began seven minutes and 11 seconds after the test started. That's when cutters -- designed to snip the strings on the bag that contained the packed heat shield -- were supposed to start. 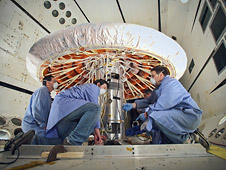 Engineers checked out the Inflatable Reentry Vehicle Experiment after the successful completion of an inflation system test. The IRVE-3 is scheduled to launch on a sounding rocket later this summer.
Credit: NASA/ Sean Smith

For a brief moment the team held its collective breath when the cutters seem to pause, but then came the sigh of relief as the strings continued to pop open. The inflatable rings and their thermal blanket started unfurling as the inflation system pumped nitrogen in correct sequence.

"There are an awful lot of complex systems packed inside the payload on IRVE-3," said Robert Dillman, the chief engineer for IRVE-3. "When it works it looks simple and that's a good thing. But there are a lot of internal parts that have to work together in order to make that simple function achievable."

The inflation system test went off without a hitch so the Inflatable Reentry Vehicle Experiment can go to Wallops to be readied for launch.

IRVE-3 is one of NASA's many research efforts to develop new technologies to advance space travel. It's part of a project called HIAD for Hypersonic Inflatable Aerodynamic Decelerator -- within NASA's Office of the Chief Technologist's Game Changing Development (GCD) Program.

"A HIAD could give NASA more options for future planetary missions or to return cargo to Earth," said Neil Cheatwood, GCD principal investigator for HIAD. "When we go to other planets with an atmosphere, we actually use that atmosphere to slow us down with an aeroshell or an aerodynamic decelerator. But the size of that aeroshell is currently limited. We can't go bigger than the diameter of the launch vehicle."

An inflatable heat shield could accommodate larger payloads that could deliver more and heavier science instruments and tools for exploration -- changing the way we explore other worlds.