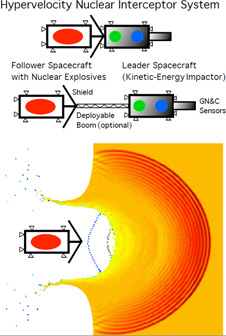 Despite the lack of a known immediate threat from a near-Earth object (NEO) impact, historical scientific evidence suggests that the potential for a major catastrophe created by an NEO impacting Earth is very real. It is only a matter of when, and humankind must be prepared for it. During the past two decades, various concepts and techniques for mitigating the impact threats from NEOs have been proposed. Unfortunately, many of these previously proposed concepts were impractical and not technically credible. In particular, all non-nuclear techniques, including slow-pull gravity tractors and kinetic-energy impactors, require mission lead times much larger than 10 years, even for a relatively small NEO. However, for the most probable impact threat with a warning time less than 10 years, the use of high-energy nuclear explosives in space becomes inevitable for proper fragmentation and dispersion of an NEO in a collision course with the Earth. However, the existing nuclear subsurface penetrator technology limits the impact velocity to less than 300 m/s because higher impact velocities destroy prematurely the detonation electronic equipment. Thus, an innovative space system architecture utilizing high-energy nuclear explosives must be developed for a worst-case intercept mission resulting in relative closing velocities as high as 5-30 km/s.