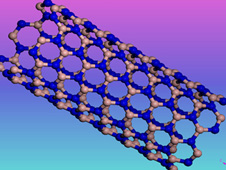 The objectives and expected significance of the proposed research are to develop a space radiation shielding material system that has high efficacy for shielding radiation and that also has high strength for load bearing primary structures. Such a material system does not yet exist. The NASA Langley Research Center (LaRC), Jefferson National Lab (JNL), and National Institute of Aerospace (NIA) as joint owners have recently synthesized long, highly crystalline boron nitride nanotubes (BNNT) using a novel pressure/vapor condensation method. The BNNT have extraordinary strength and high temperature stability. The BNNT are made up entirely of low Z (atomic number) atoms - boron and nitrogen. The BNNT can theoretically be processed into structural BNNT and used for load bearing structure. The BNNT are nanotubes; their molecular structure is attractive for hydrogenation. A comprehensive literature search - as well as independent thinking - will be performed to determine what is the best processing approach for hydrogenating the BNNT.

Neutrons are produced as secondary radiation when the galactic cosmic radiation (GCR) and solar energetic particles (SEP) interact with the walls of the space structure (vehicle, lander, habitat) and also with the regolith on the surfaces of Moon or planets. This secondary neutron radiation has largely been ignored in previous space architectures and yet neutron radiation is known to be damaging to humans especially with regard to the formation of radiogenic cancers. Radiation protection is an enabling technology for future exploration missions. The Agency cannot support human missions greater than approximately 90 to 100 days beyond low Earth orbit (LEO) without developing shielding and/or biological countermeasures to remain below Permissible Exposure Limits. The Success Criteria are adequate shielding measures to enable safety of crew and hardware during long duration human missions up to 1 year in space. It is the intent of the proposed research to bring the Agency closer to extending space missions beyond the 100 days, with 1 year as a long-term goal.
› Back To Top