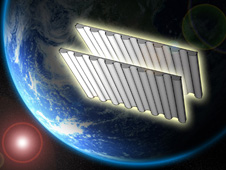 Intriguingly, although light is massless, it carries momentum. That momentum can be imparted to refracting, reflecting, and absorbing objects in the form of “radiation pressure”. A strikingly obvious manifestation of optical momentum is seen in the tail of comets, which always point away from the sun. Radiation pressure within a star is an important component that prevents stars from collapsing under their own gravity. Although the value of “radiation pressure” is comparably weaker in the vicinity of the Earth (roughly a billionth of a pound per square inch), the effect on satellites has been noticeable since the dawn of the space age. However, only recently have space agencies successfully unfurled solar sails to explore the potential for near-Earth and interplanetary space travel. Those missions, launched in 2010, now open the potential for the full development of all-solar space travel. Early proponents of solar sailing such as Louis Friedman and Carl Sagan realized a multitude of advantages of solar sailing. Key among them is the nearly limitless lifetime of the energy source – sunlight. In many cases, the small but constant supply of radiation pressure outweighs, over time, the large but brief force afforded by conventional propellants.

This study seeks to look beyond the use of radiation pressure for thrust, and to explore a means of solar navigation whereby a solar craft would be steered by use of radiation pressure. The idea is based on a recent discovery by the study team. They found that transparent refractive objects may settle into a position where they feel a force that is perpendicular to the incoming light direction. This transverse force is akin to the lift experience by an airplane wing and other airfoils. Thus they call it “optical lift”. Objects in their experiments simultaneously thrust forward. The combination of lift and thrust allows for the optical steering of optical wings. In the coming year they will conduct experiments and computer modeling to advance this discovery for future space missions employing solar sails. The long-term goal is to devise a means to allow solar sails to navigate through space using only the power of sunlight. In the short term they will design and fabricate small-scale arrays of optical wings and test them in the laboratory to demonstrate the feasibility of the concept. They will also perform numerical modeling to determine optimal design parameters for optical wings.

Space-related applications of a fully maneuverable solar craft are numerous. For example, a plethora of orbiting space debris now litters the Earth. Solar sails could be used to intercept the space junk, forcing it to descend toward the Earth where it would burn in the atmosphere. The low launch cost of lightweight solar sail receptacles would make the cleanup cost relatively low. Another mission concept under current development is to park a solar sail between the Sun and Earth to serve as an early warning system for solar storms. Variabilities in the space environment will require attitude control, which may be achieved with optical lift forces. Radiation pressure exerted on solar panels of spacecraft has been used for years, and future satellites are being designed with solar sail components. The optical lift capability of specially designed solar sails will likely be incorporated into these plans once the technology matures. In the distant future, one can imagine interplanetary missions and visits to exoplanets benefitting from the advantages of the optical lift force.
› Back To Top