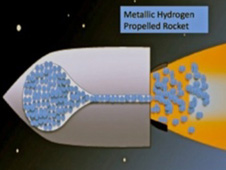 Atomic metallic hydrogen, if metastable at ambient pressure and temperature could be used as the most powerful chemical rocket fuel, as the atoms recombine to form molecular hydrogen. This light-weight high-energy density material would revolutionize rocketry, allowing single-stage rockets to enter orbit and chemically fueled rockets to explore our solar system. To transform solid molecular hydrogen to metallic hydrogen requires extreme high pressures, but has not yet been accomplished in the laboratory. In the proposed new approach electrons will be injected into solid hydrogen with the objective of lowering the critical pressure for transformation. If successful the metastability properties of hydrogen will be studied. This new approach may scale down the pressures needed to produce this potentially revolutionary rocket propellant.
› Back To Top