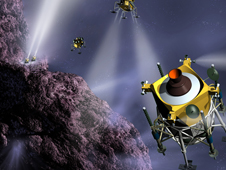 The sources of power used for deep space probe missions are usually derived from either solar panels for electrical energy, radioisotope thermal generators for thermal energy, or fuel cells and chemical reactions for chemical energy and propulsion. This NIAC study will investigate the ability to access local resources on planetary bodies and to transform them into forms of power that will expand the capabilities of future robotic and human missions which will face new challenges as we continue to explore planetary bodies beyond the Moon. The surface materials found on asteroids, comets and terrestrial moons and planets consist mainly of minerals composed of metal oxides, but they also contain ices of substances such as water and carbon dioxide all of which can be vaporized thermally into gases at moderate temperatures due to low atmospheric pressure conditions. Phase I of this NIAC study will focus on verifying the assumptions currently made about the properties of solid volatile ices found throughout the solar system, and demonstrating through experiments how much gaseous material can be produced from them to provide useful mechanical power for such activities as lifting objects using actuators and for providing cold gas propulsion. The work will also investigate new engineering concepts for using the gasification of ice and mineral rocks found inside asteroids and comets in order to divert their path away from a potential collision course with Earth.
› Back To Top