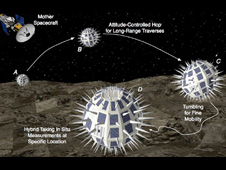 The objective of this effort is to develop a mission architecture that allows the systematic and affordable in situ exploration of small Solar System bodies (such as asteroids, comets, and Martian moons); the exploration of these objects would significantly contribute to constrain the Solar system origin and its early evolution, would allow the evaluation of small bodies' potential for in situ resource utilization in view of future manned missions, and would allow the assessment of the astrobiological relevance of different small bodies' populations. The proposed mission architecture stems from a paradigm-shifting approach whereby small bodies' low gravity is directly exploited in the design process, rather than being faced as a constraint. At a general level, a mother spacecraft deploys on the surface of a small body one or more mobility platforms, each sealed in one enclosure and with minimal internal actuation (critically enabled by the micro-gravity environment). Each mobility platform can perform either 1) long excursions (by hopping), or 2) short traverses to specific locations (through a sequence of controlled "tumbles"), or 3) high-altitude, attitude-controlled ballistic flight (akin to spacecraft flight). The proposed robotic platforms would behave as spacecraft/rover hybrids, capable of accessing most destinations on virtually any small body. The minimalism and motion capabilities of such spacecraft/rover hybrids would allow multi-asset missions where not only specific targets on small bodies' surface could be closely observed, sampled, and cached, but also high-risk, high-payoff measurements could be taken (since the loss of one hybrid would not spell the end of the mission).
› Back To Top