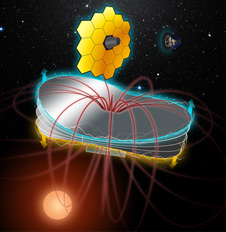 One of the primary reasons space missions are so expensive is the extremely high cost per unit of mass to launch a spacecraft. Making spacecraft lighter can greatly reduce these launch costs, leading to more affordable missions and thus more opportunities for on-orbit research. This study will examine a new, lighter kind of spacecraft structural support system, one in which electromagnetic forces generated by running current through high-temperature superconductors (HTSs) move and unfold parts of the structure from its stowed position within the launch vehicle. This would allow for the replacement of heavier components like physical actuators and support beams with coils that repel and attract each other magnetically or large coils that start in a folded position and expand due to their own magnetic field when current is run through them. The Phase I study will design several different HTS structural systems that perform the same function as physical structural systems and then examine through tradespace analyses for which applications HTS designs are preferable to traditional designs and thus warrant further study.
› Back To Top