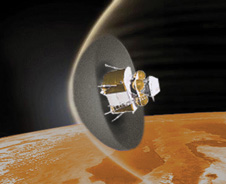 High-mass planetary surface access is one of NASA’s Grand Challenges involving entry, descent and landing (EDL). During the entry and descent phase, frictional interaction with the planetary atmosphere causes a heat build-up to occur on the spacecraft which will rapidly destroy it if a heat shield is not used. However, the heat shield incurs a mass penalty because it must be launched from Earth with the spacecraft, thus consuming a lot of precious propellant. This project proposes to fabricate entry heat shields from the regolith of moons and asteroids. This in situ (on site) heat shield fabrication can save tons of mass (and millions of dollars in cost) that has to be transported from Earth.
› Back To Top