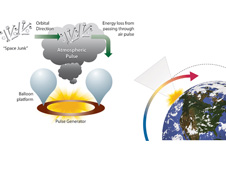 The amount of debris in low Earth orbit (LEO) has increased rapidly over the last twenty years. This prevalence of debris increases the likelihood of cascading collisions that cause the debris generation rate to outstrip the rate at which debris deorbits, falling into the atmosphere and burning up. This accumulation creates debris belts that render many orbits unusable. Current strategies emphasize debris mitigation, as there is no practical method for debris removal. Raytheon BBN Technologies (BBN) and the University of Michigan will study the Space Debris Elimination (SpaDE) system to remove debris from orbit by firing focused pulses of atmospheric gases into the path of targeted debris. These pulses will increase drag sufficiently to cause the deorbit rate to exceed the debris generation rate. The pulses themselves will fall back into the atmosphere, leaving no residual trace in orbit to interfere with LEO satellites. In contrast to other proposed methods, SpaDE is failsafe, in that it places no solid material in orbit where a malfunction could create new debris.

This project will conduct technology risk reduction analyses and modeling. The research will produce an academic paper and presentation describing the technical results and providing the foundation for future work, to include prototyping, field experiments and ultimately deployment of a SpaDE system.
› Back To Top