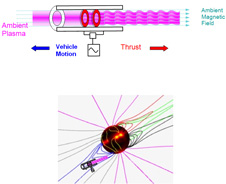 This concept addresses the fact that space exploration is costly, primarily due to our current need to bring everything with us from the Earth’s surface. Truly robust and affordable space exploration will require that we use all the available resources we can find in space. The plasma wave concept deals with two facts: Plasma waves are considered in fusion power systems, semiconductor manufacturing, and in some very theoretical electric propulsion thrusters, such as VASIMR, which still must carry its own propellant. In contrast, this concept simply uses an on-board power supply and antenna on a vehicle that operates in the existing plasma. The spacecraft beams plasma waves in one direction with the antenna, which would generate momentum that could propel the vehicle in the other direction without using any propellant on the space ship. Such a system could maneuver in the plasma environment for as long as its power supply lasted, without needing to be refueled. One particular wave to consider is the Alfven wave, which propagates in magnetized plasmas and has been observed occurring naturally in space.

(The PI used to call this idea "The Alfven Wave Surfer", but it's really an "Alfven Wave Swimmer", in that the spacecraft keeps wiggling the plasma behind it to get around, sort of like how a person might kick themselves through the water)
› Back To Top