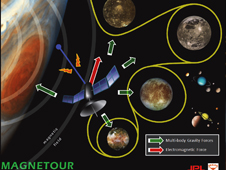 Description
We propose a new mission concept, called MAGNETOUR, that enables a spacecraft to orbit and travel between multiple moons of an outer planet, using very little or even no propellant. To achieve this free-lunch ‘Grand Tour’, we exploit the unexplored combination of magnetic and multi-body gravitational fields of planetary systems. This concept involves combining two main innovations: Revolutionary Value (Significance):

The prospect of a quasi-propellantless mission to explore planetary systems is extremely appealing. Without the burden of propellant, scientific payload could be larger and the lifetime of the spacecraft would be only limited by the failure of its primary components and its ability to sustain the harmful radiation environment. This very long tour mission has therefore a strong potential for improved (possibly unforeseen currently) scientific return at planetary moons In addition, combining multi-body gravitational and electromagnetic dynamics is totally new and would open up path planning options mission designers are currently unaware of. If successful, this concept will therefore represent a dramatic departure from conventional mission design for planetary moon systems and could lead to the next generation of high science value, low cost robotic solar system exploration. In the future, we envision future NASA missions directly utilizing the results of this study to orbit multiple planetary moons (e.g. a mini-JIMO class mission) in a single, quasi-propellantless mission, thus obtaining flagship class science using possibly sub-flagship programs (e.g. New Frontiers). For instance, in the Jupiter system, MAGNETOUR could allow a quasi-propellantless tour with loose science orbits around Ganymede, Europa and Io.
› Back To Top