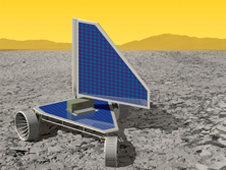 The surface of Venus is the most hostile environment in the solar system, with a surface temperature hotter than an oven, and a high-pressure, corrosive atmosphere. It is significant that, although humans have sent rovers to Mars with operating lifetimes of eight years and counting, the most capable mission to the surface of Venus has been a stationary lander that survived for only two hours. Exploring the surface of Venus with a rover would be a “stretch” goal, which will push the limits of technology in high-temperature electronics, robotics, and robust systems.

In work to develop sensors to work inside of jet engines, NASA Glenn has developed electronics that will continue to function even at the Venus temperature of 450°C. These electronic components represent a breakthrough in technological capability for high temperatures. We have also tested solar cells up to Venus surface temperatures; although the power density produced is low (because of the high cloud levels and thick atmosphere), we can produce electrical power on the surface. So the fundamental elements of a rover for Venus are not beyond the bounds of physics: we could survive the furnace of Venus-- if we can come up with an innovative concept for a rover that can move on extremely low power levels.

To do this, we need to take advantage of the in-situ resources of Venus for mobility. The atmospheric pressure at the surface is a hundred times greater than that of Earth. Even though the winds at the surface of Venus are low (under one meter per second), at Venus pressure even low wind speeds develop significant force. We thus propose an innovative concept for a planetary rover: a sail-propelled rover to explore the surface of Venus. Such a rover could open a new frontier: converting the surface of a new planet into a location that can be explored by robotic exploration.

Although landsailing vehicles can climb hills, they require an operating landscape that is not densely packed with obstacles on the scale of meters. In this respect the surface of Venus actually does us a favor: from the views of Venus taken by the Russian Venera probes, the surface of Venus can be seen to have landscapes of flat, even terrain stretching to the horizon, with rocks at only centimeter scale (at least in the locations that Venera probes landed). Venus is ideal terrain for landsailing! In this project, we will analyze the technologies needed for a robotic landsailing vehicle on Venus, and do a top-level analysis and trade study of the rover design. Once the top level trade has been done, we will utilize the NASA Glenn COMPASS spacecraft design team to do a detailed design study of the vehicle and mission. In the final report, we assess the design feasibility and benefits over competing technologies.

The project is:
› Back To Top