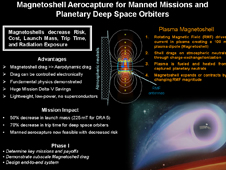 Description
Mission studies have shown that manned mars missions and deep space planetary orbiters require aerobraking and aerocapture which use aerodynamic drag forces to slow the spacecraft. The ability to utilize these atmospheres to slow down and capture spacecraft dramatically reduces the cost of future missions, launch mass, and enable long term studies of the outer planets and moons that would not be possible with current propulsive braking methodologies. The Plasma Magnetoshell Aerobraking, Aerocapture, and Entry System (Magnetoshell AAES) to be developed in this program holds the potential to perform the desired braking with significantly increased drag and control while dramatically reducing the mass required. Implementation of aerobraking by employing a solid deflector or aeroshell as a method for orbit insertion and circularization has been successfully demonstrated in the past, with mass savings greater than 50%. In order to reduce the effect of frictional heating and dynamic pressure on the typically fragile aeroshell the braking must be distributed over many orbital passes at a higher altitude in the less dense regions of the atmosphere.

The Plasma Magnetoshell is based on demonstrated experimental results and the successful implementation would dramatically decrease mission risk, launch cost, mass, and overall radiation exposure. The Plasma Magnetoshell is a high-Beta (the ratio of plasma to magnetic field energy density) dipole plasma configuration which would initially be populated with ambient atmospheric gases. This plasma is formed, sustained, and expanded with an electrodeless Rotating Magnetic Field (RMF), which has been shown in previous experiments to generate the required, fully ionized, high temperature magnetized plasma. RMF plasma formation induces large currents in the plasma that inflate and maintain the large-scale magnetic structure. The primary drag-inducing interaction between the magnetically confined plasma ions and the incoming neutral atmospheric particles is that of charge exchange, which has the largest cross section. After a charge exchange, the now magnetized atmospheric ion reacts its directional momentum (in the frame of the spacecraft) onto the magnet via field line bending and stretching.

The advantages of such a system are many. Frictional heating would no longer be of concern as the energy dissipation required to slow the spacecraft would be deposited into the plasma ions helping to maintain the magnetospheric Beta. With the Magnetoshell now being composed of massless magnetic field and a gram of plasma, the transverse scale of the magnetic barrier can be as large as 100 meters.

This means that for any given breaking drag forces on the Magnetoshell will be three orders of magnitude larger than the aerodynamic forces on the spacecraft. With the ability to rapidly and precisely modify the drag in varying atmospheric conditions, much larger braking forces can now be contemplated at low risk, enabling very aggressive aerocapture maneuvers. In addition, the Magnetoshell will shield against solar radiation. As will be shown, the mission benefits are dramatic. A NASA DRA 5.0 manned mission to Mars can be accomplished with 225 MT is mass savings and decreased programmatic and technical risk. Deep space planetary orbiters can be launched on rapid, direct trajectories decreasing trip times by more than 70%. And, with the same launch mass, a mission can be accomplished with significantly less trip time and thus, less solar and cosmic ray radiation exposure.

In Phase I a subscale Magnetoshell will be demonstrated, while in Phase II a complete, TRL 4 level system will be developed and tested. Phase I will also characterize a complete set of missions and develop a system-level architecture. At the conclusion of this program a lightweight Magnetoshell AAES will have been developed that will significantly expand the capability of both manned missions and deep space orbiters.
› Back To Top