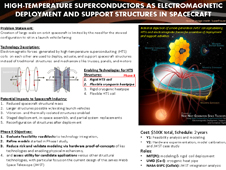 Description
In our NIAC Phase I study, awarded September 2011, the MIT Space Systems Lab (MIT SSL) began investigating a new structural and mechanical technique aimed at reducing the mass and increasing the stowed-to-deployed ratio of spacecraft systems. This technique uses the magnetic fields from current passing through coils of high#temperature superconductors (HTSs) to support spacecraft structures and deploy them to operational configurations from their positions as stowed inside a launch vehicle fairing. The chief limiting factor in spacecraft design today is the prohibitively large launch cost per unit mass. Therefore, the reduction of spacecraft mass has been a primary design driver for the last several decades. The traditional approach to the reduction of spacecraft mass is the optimization of actuators and structures to use the minimum material required for support, deployment, and interconnection. Isogrid panels, aluminum or composites, and gas-filled inflatable beams all reduce the mass of material necessary to build a truss or otherwise apply surface forces to a spacecraft structure. We instead look at using electromagnetic body forces generated by HTSs to reduce the need for material, load bearing support, and standoffs on spacecraft by maintaining spacing, stability, and position of elements with respect to one another.

HTS structures present an opportunity for significant mass savings over traditional options, especially in larger systems that require massive structural components. Electromagnetic body forces are used to move and position spacecraft elements in lieu of traditional structural components, such as telescoping beams, segmented masts and inflatables. HTS structures have less mass per characteristic length of the spacecraft than aluminum beams and therefore offer the performance benefits of larger structures while fitting into existing launch vehicle payload fairings. However, the major cost of using HTS structures is the need to cool them to low temperatures, which requires passive cooling structures like heatshields or active cooling subsystems like cryogenic heat pipes.

Our proposed Phase II effort will, in the two additional years of study time, expand upon the primary questions of our Phase I study, develop HTS structures from a TRL of 2 to early 3, and reduce the risks associated with new technology development. Our Phase II effort includes Prof. Raymond Sedwick, Director of the University of Maryland’s Space Power and Propulsion Lab, as a co-investigator focused on the development and testing of a flexible cryogenic heatpipe as a key enabling technology for a number of HTS structural applications that require a flexible HTS coil. We also add collaborators from NASA Goddard Space Flight Center (GSFC) Mission Engineering and Systems Analysis division to the team to support technology trade studies and integration feasibility assessment and analysis for HTS structures in a large, complex, and fairing-limited precision structure such as the James Webb Space Telescope (JWST).

By the end of Phase II, we aim to have completed and tested an experimental flexible cryogenic heatpipe, a technology integration case study of JWST, laboratory experimental demonstrations of HTS coils unfolding panels and separating while superconducting, and models calibrated both by experiments and analytical solutions. These are the first steps along the HTS technology demonstration path, and those steps combined with the feasibility and implementation analysis to be conducted will bolster the credibility and prepare the technology for further TRL advancement.
› Back To Top