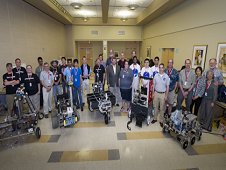 Eleven teams initially registered for the competition. Six teams made it to WPI for the start of the challenge. After weigh-in and inspections, one team (Space Pride -- http://www.spacepride.com) successfully met all requirements and competed in the challenge but did not win a cash prize.

"By participating in this year's Sample Return Robot Challenge, teams have helped to move the ball down the field in the area of autonomous robotic systems," said Mason Peck, NASA's Chief Technologist. "Hopefully, all the teams will continue to improve their robotic systems and return to participate in future NASA Centennial Challenges."

The competition has demonstrated the difficulty in developing truly autonomous robotic systems for future space exploration. While none of the teams were able to successfully meet the goals of this year's challenge, all demonstrated their ability to creatively work toward building future robotic explorers.

The Sample Return Robot Challenge's rigorous guidelines, rules and performance requirements ensure that winning entries are constructed and function to meet challenge objectives. To that end, prizes are only awarded once all specifications are met. No prizes were awarded during this competition; NASA's $1.5 million prize purse will remain available for future Centennial Challenges.

View NASA photos from the event:

WPI is the first university selected as host and manager for one of NASA's Centennial Challenges Programs, which promotes technical innovation through novel prize competitions. NASA chose WPI to run this particular competition because of its proven experience managing robotics competitions, its academic expertise in robotics engineering, and its leadership in science, technology, engineering and mathematics education.

WPI was the first university to offer a bachelor's degree program in robotics engineering. In 2009, a WPI robotics team took home $500,000 in NASA prize money after winning the Regolith Excavation Challenge.

NASA uses prize competitions to establish important technical challenges without having to specify the approach that is most likely to succeed, while only paying for successful results. These competitions increase the number and diversity of individuals, organizations and teams that are addressing a particular problem or challenge of national or international significance. These challenges stimulate private sector investment many times greater than the cash value of the prize.