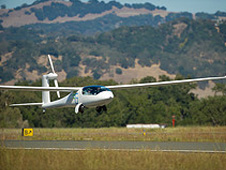 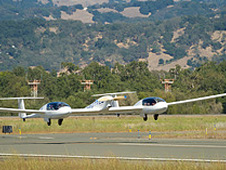 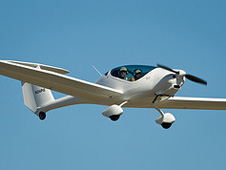 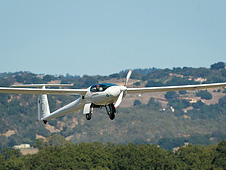 The Emery Riddle Aeronautical University (ERAU) aircraft.
› View all large images in Flickr
› Green Flight Challenge News
It was another fine day in Santa Rosa for the Green Flight Challenge sponsored by Google. Weather was cool in the morning but quickly warmed into the mid 80’s with clear blue skies and a few wispy clouds floating by in a slight breeze.

The morning kicked off at 8:00 AM with the daily briefing for the competitors, CAFE volunteers, and media representatives. The teams today would be flying the fuel efficiency phase of the competition. The requirement was to fly four cycles of the closed loop course with an average speed of at least 100 miles per hour and use the energy equivalent of less than 1 gallon of gasoline per passenger. Total miles to be covered would be about 200 miles.

There were many technical questions from the team pilots regarding the flight path requirements. CAFE reiterated the minimum (4,000 ft) and maximum (6,500 ft) altitude requirements, staying within 2 miles of the course flightline, and making course turns at the pylons within one quarter mile. The concern and attention to these details said a lot about the seriousness of the teams to have a clean flight and score points toward the $1.3M prize purse.

The planes were towed out of the CAFE campus at about 10:00 AM with e-Genius in the lead, followed by Pipistrel USA.com, Phoenix, and the Emery Riddle Aeronautical University (ERAU) plane. E-Genius tookoff about 10:20, with Pipistrel at 10:25, and Phoenix at 10:30. ERAU took off at about 10:45 AM.

The planes proceeded out onto the course circuit and made their first, second, and third passes back over the airport at about 30 minute intervals. The planes made a low pass over the CAFE hanger on their final loop to stop the clock on their flight run. eGenius completed the course in a little under 2 hours and was the first to land followed shortly by Pipistrel USA.com. Everyone was then on the lookout for the Phoenix aircraft. The two hour mark passed – where was Phoenix? Shouldn’t they be here by now? Had they had a problem? As the minutes ticked off, the questions and tension mounted. Word came that an aircraft had been sighted on final approach to the finish line. As it got closer all were surprised to see it was ERAU! They had passed Phoenix and they finished just over the two hour mark. The question then in everyone’s mind was where was Phoenix? Finally word came that they were on final approach and Phoenix passed the finish line after about 2 hours and 30 minutes.

Everyone was happy that all four planes were now safely back and they were all greeted with loud applause as they were towed back the CAFE campus. The pilots were debriefed, the planes inspected, and flight data was retrieved from the onboard recorders. The planes were later rolled into position to start their recharging cycle that will continue over night and into tomorrow.

Teams will be taking it a bit easy tomorrow, analyzing their data, and planning their strategy for the speed competition on Thursday.
September 26, 2011
Charles Schultz Airport
Santa Rosa, CA 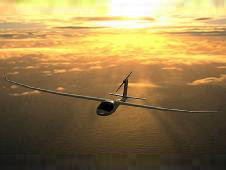 We are now down to three teams competing for the NASA funded prize purse for the Green Flight Challenge sponsored by Google. They are PhoEnix, Pipistrel-USA, and e-Genius. Five of the original thirteen registered teams had received FAA licenses and filed required paperwork with CAFÉ by the August 25th deadline.

Yesterday was check in day for the teams and aircraft. Team Fueling notified CAFE that they were withdrawing from the competition due to mechanical problems. The team from Emory Riddle Aeronautical University was disqualified for not having the required ballistic parachute installed in their aircraft and not being able to fly with two pilots as required.

This morning the weather was nice after the fog lifted around 10:00 AM. Highs in low 80’s. Everyone needed sun screen.

A Team Briefing was held at 8:00 to go over the plan for the days events which included completion of vehicle inspections, weight measurements, takeoff noise and distance tests.

At about 11:00 the CAFE Board met to consider a petition from ERAU that they be allow to fly the course and collect flight data even though they would not be eligible for the NASA prize funds. The CAFE board approved their request and everyone appeared pleased. The other teams were very supportive of ERAU. ERAU will be permitted to fly on noninterference basis – tomorrow they will take off on the fuel efficiency flight about 15-20 minutes after the others depart.

The noise and takeoff distance tests got underway shortly after 3:00 PM. CAFE allowed media to go out near the runway and take video and photos as the planes took off and cleared the 50 ft height requirement and noise measurement. PhoEnix was first up Pipistrel-USA was next,, followed by e-Genius, and then ERAU. All were successful on their first attempts. The e-Genius team was offered and accepted a chance to do a 2nd run due to unexpected background noise from another incoming aircraft across the field. They were again successful. All the planes were impressively quite!

That concluded the first day of GFC competition and the aircraft returned to the CAFE hanger campus to recharge their batteries for tomorrow’s flight which will cover about 200 miles. The weather looks good for tomorrow.
› Back To Top